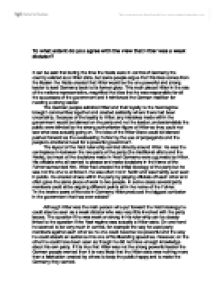 To what extent do you agree with the view that Hitler was a weak dictator?

To what extent do you agree with the view that Hitler was a weak dictator? It can be said that during the time the Nazis were in control of Germany the country existed as a Hitler state, but some people argue that this idea comes from the illusion the Nazis created that Hitler would be the one powerful and strong leader to lead Germany back to its former glory. This myth placed Hitler in the role of the nations representative, magnified the idea that he was responsible for all the successes of the government and it reinforced the German tradition for needing a strong leader. ...read more.

The layout of the Nazi ruler-ship centred directly around Hitler. He was the centrepiece in-between the two parts of the party (the traditional elite's and the Nazis), but most of the decisions made in Nazi Germany were not made by Hitler. His officials who all wanted to please and make decisions in the name of the Fuhrer surrounded him. Hitler had created the initial ideology of the party but he was not the one to enforce it. He was often not in Berlin and was hardly ever seen in public. He created chaos within the party by playing officials off each other and often gave the same piece of work to two people. ...read more.

The question if he was weak or strong in his ruler-ship can be closely linked to the question if the Nazi regime was actually a Hitler state. On one hand he seemed to be very much in control, for example the way he used party members against each other so no one could become too powerful and the way he could absorb an audience into one of his liberating speeches. However, on the other he could have been seen as though he did not have enough knowledge about his own party. If it is true that Hitler was not the strong powerful leader the German people wanted then it is very likely that the Hitler state was nothing more than a fabrication created by others to keep the public happy and to make the Germany they wanted. ...read more.