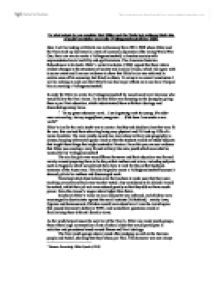 To what extent do you consider that Hitler and the Nazis had achieved their aim of social revolution and unity (Volksgemeinschaft) by 1939?

To what extent do you consider that Hitler and the Nazis had achieved their aim of social revolution and unity (Volksgemeinschaft) by 1939? Here I will be looking at Hitler's rule in Germany from 1933-1939 where Hitler and the Nazis took up Germany in a state of economic depression after losing World War One, their aim was to create a Volksgemeinschaft; a classless society with unprecedented social mobility and egalitarianism. The American historian Schoenbaum in his book Hitler's social revolution (1960) argued that there where evident changes in the structures of society and in social values, which I do agree with to some extent and I can see evidence to show that Hitler's aim was achieved in certain areas of his economy; but failed in others. To come to an overall conclusion I will be looking at each area that Hitler's rule had major effects on to see how it helped him in creating a Volksgemeinschaft. In order for Hitler to create his Volksgemeinschaft he would need loyal Germans who would follow the Nazi vision. To do this Hitler was focusing on the young by giving them a pro-Nazi education, which indoctrinated them with their ideology and discarded opposing views. 1. "In my great educative work....I am beginning with the young. We older ones are used up, but my magnificent youngsters.... With them I can make a new world" Hitler's aim for the male youth was to create a healthy and obedient class that were fit for war, this evolved their schooling being very physical and P.E took up 15% of a males timetable. ...read more.

To ensure that women had many children and stayed at home, women at work were discouraged and their wages where made much lower. However, the amount of women in work had risen from11.48 million in 1933 to 12.7 million in 1939, this is because of Germany preparing for war and they had to have women doing the jobs that the men couldn't do whilst they where away. This shows that the Nazi's contradicted themselves and the birth rate would have been affected by this. Looking at women in the Volksgemeinschaft I do not think that Hitler was successful although he did force the Nazi views on many women, this can be seen in education and taxes being changed in the women's favour, making a clear incentive for women. Although you can see that many women ignored the Nazi's efforts and women actually had fewer children, suggesting the women where showing some slight opposition by ignoring the Nazi's. As well as the Nazis flaw in trying to stop women from going to work where they had to if the country was preparing for war. Hitler saw Christianity and faith as an obstacle for his Volksgemeinschaft and was trying to ultimately remove it, this can be seen in the quote below - this shows he only wanted the Nazi' worshipped. 3 "You are ever Christian or a German, you can't be both" One of Hitler's first attempts was the creation of a state supported Reich church in 1933, which was the joining of many protestant churches to create a new religion of Nazi ideas, creating a "positive Christianity"; which was a term used by Nazi leaders to refer to a modal of Christianity consistent with Nazism. ...read more.

a dramatic impact An example of this was in the social aspect, I think that Hitler was extremely successful in excluding the "Volksfeind" from society, this was because many Germans where appreciative to him because he had brought them out of an economic depression caused by WW1- getting them jobs, whilst he did keep a very strict lookout over them with his SA helping him to achieve a Volksgemeinschaft. This made many Germans reluctant to oppose him, where the biggest opposition he had came from the "Edelweiss pirates" and the Confessional Church; plus statistical suggestions that the women where revolting against him by having fewer children. In creating a revolution however, I do not think that he was successful but could have been in the future, this is because he had a very strong impact on youths lives and succeeded in creating very militant youths that where only taught Nazi policies; although the adults could not be convinced in this way and he had little effect on them. Hitler however did have huge failures in the areas of women and religion, this is because the roles he choose for women could not be practised; as they needed women to work in war, and not many people agreed with the Reich Church; having very little effect. Overall, I do not think that he created a Volksgemeinschaft although he could have done if they had time and the community was all born into Nazi rule. 1 Herman Rauschnig, Hitler Speaks (1939) 2 Marianne Gartner, a German girl in one of Hitler's youth groups 3 Hitler in a private conversation in 1933, in "Hitler Speaks" by Hermann Rauschnig 4 Tests from German maths text books ...read more.