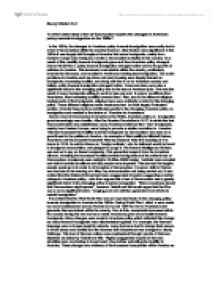 To what extent does a fear of Communism explain the changes in American policy towards immigration in the 1920s?

The war therefore changed the American policy on immigration as there was an increased feeling of hostility towards foreign members of society, meaning it can be argued that it had more of an influence than the fear of Communism. As well as Communist fears and the results of World War I, there were many significant social fears that contributed to the changing American policy on immigration. In the 1920s, many unskilled and poorly paid 'new' immigrants lived in poor conditions and in big cities. Many Americans resented these immigrants as they blamed them for running-down the areas they lived in and due to increased crime (linked to the Italians) and increased drinking (linked to the Irish and Southern Germans), hostility towards immigrants increased further. Many journalists, reformers and politicians held the increasing crime rates in cities as proof of the bad influence of immigrants. It can however be argued that social fears were of limited influence in this changing policy as most crimes committed were petty and associated with poverty rather than ethnicity. As well as the influence of crime rates, education was another factor which was influential in America's changing policy. Many schools tried to refuse entry to many immigrants and were impervious to the efforts of political bosses to allow the students in. This further emphasises the hostility felt towards these immigrants as despite the complains about their lack of education, many felt they should not be allowed into prestigious universities. ...read more.