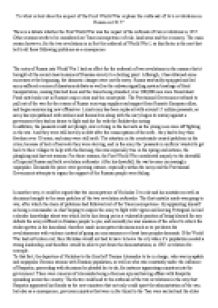 To what extent does the impact of the First World War explain the outbreak of two revolutions in Russia in 1917?

﻿To what extent does the impact of the First World War explain the outbreak of two revolutions in Russia in 1917? There is a debate whether the First World War was the impact of the outbreak of two revolutions in 1917. Other reasons worth to be considered are Tsars incompetence of rule, land issue and the economy. The main reason however, for the two revolutions is in fact the outbreak of World War I, as this factor is the root that led to all these following problems as a consequence. The entry of Russia into World War I had an effect for the outbreak of two revolutions in the manner that it brought all the social class tensions of Russian society to a boiling point. Although, it has obtained some successes at the beginning, the dramatic changes were not far away. Russia was badly equipped and led army suffered a series of disastrous defeats as well as the railway signalling system breakage of food transportation, causing blocked lines and the trains being stranded, over 200,000 men were found dead. Food riots broke out in Russia's major cities and the countryside. The Provisional Government refused to pull out of the war for the reason of Russia receiving supplies and support from Russia's European allies, and began announcing new offensives. ...read more.

To that fact, the departure of Nicholas to the front left Tsarina Alexandra to be in charge, who was incapable and unpopular German woman with Russian population, as well as who was constantly under the influence of Rasputin, proceeding with decisions he pleaded her to do, for instance appointing ministers into the government. There were rumours of Alexandra being a German spy and having affairs with Rasputin spreading across the country. The factor could lead to the outbreak of the two revolutions in the way that Rasputin appointed his friends as the new ministers that not only could upset the administration of the war, but also as a consequence, previous ministers that were in fact loyal to the Tsar were sacked and the elites have felt alienated from the Tsar by the integration of Rasputin. Nevertheless, World War I still remains as most important factor in leading to the outbreak of two revolutions, because as mentioning previously, without the war, the Tsar would not have to leave Tsarina behind, the autocracy would not be under Rasputin?s influence and subsequently it would not anger Russian people even further onto going to such steps as revolutions. Land issue is another factor that is considered to be linked to the problem. The peasantry have suffered a great deal, there were many cases of land hunger, because of the shortages of crops, there was nothing to harvest. ...read more.

Despite the argument that the economy was most significant in two revolutions, the World War is what causes these economic problems in the first place. The war costs went up from 4-30 million, which had the devastating affection the economy as it led to inflation and shortages of goods. Due to this it is clear that the war played a more prominent role in causing two revolutions than economy. In conclusion, the main cause for the outbreak of the two, October and February revolutions was World War I. To make a clear judgement, if there was not an outbreak of war in 1914, then Russia would not have experienced the revolutions, as well as other important factors chained to this. Before the war occurred, the economy was stabilised and no sign of inflation was seen to be occurring, as well as there was no causes in a widespread discontent. Additionally, the army would either not have a reason to be disloyal, there would be no humiliating defeats and blames thrown at Nicholas II for every failure of the army at war, as well as him leaving the Tsardom. Even though factors such as the land and economy problems, incompetent leadership all have caused an additional push to both revolutions, World War was at the starting line of problems, therefore is the main factor that can be recognised in the creating of the two revolution outbreaks. ...read more.