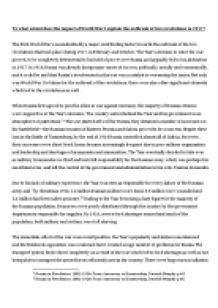 To what extent does the impact of World War I explain the outbreak of two revolutions in 1917?

﻿To what extent does the impact of World War I explain the outbreak of two revolutions in 1917? The First World War was undoubtedly a major contributing factor towards the outbreak of the two revolutions that took place during 1917, in February and October. The Tsar?s decision to enter the war proved, to be completely detrimental to his hold of power over Russia and arguably led to his abdication in 1917. In 1914, Russia was already facing major issues of its own, politically, socially and economically, and it could be said that Russia?s involvement in the war was a catalyst to worsening the issues. Not only was World War I to blame for the outbreak of the revolutions, there were also other significant elements which led to the revolutions as well. When Russia first agreed to join the Allies in war against Germany, the majority of Russian citizens were supportive of the Tsar?s decision; ?the country united behind the Tsar and his government in an atmosphere of patriotism.?[1] The war started off well for Russia, they obtained a number of successes on the battlefield?the Russian invasion of Eastern Prussia and Galicia proved to be a success; despite their loss in the Battle of Tannenburg, by the end of 1914 Russia controlled almost all of Galicia. ...read more.

If there was a vacuum of power in the centre of the ruling system, then he was the empty space. In a sense, Russia gained in him the worst of both worlds: a Tsar determined to rule from the throne yet quite incapable of exercising power?.[3] It seems as though the effects of World War I had a huge impact on the outbreaks of the February Revolution, yet during the October Revolution, it appears that other factors had a considerable effect on the outcomes. After the abdication of the Tsar, a Provisional Government formed and took over the running of the country. The new government was made up of a mixture of liberals?mainly Octobrists and Kadets. The Provisional Government introduced some important early reforms ?which it hoped would lay the foundations for a new liberal, democratic Russia?[4]. These included freedom of the press, the release of all political prisoners and the preparation of the calling for a Constituent Assembly which would hopefully draw up a new democratic constitution for Russia. Despite these new improvements, they made the mistake of deciding to continue to keep Russia fighting in the war along with the Allies. Although this decision was destructive to the development of the democratic Provisional Government, it was somewhat unavoidable due to the Allies threatening ...read more.

In addition to their increasing popularity their leader, Lenin, who was a pioneer of Marxist ideology, was relatively important to the coup. However, John Laver suggests that ?Lenin?s role in the coup itself was not crucial?[8], and that it was in fact Trotsky, famously known for being an excellent orator and organiser, who was essential to the October Revolution. The extent at which the First World War was responsible for the two revolutions in 1917 has to view each revolution separately, as the main causes for each were completely different. For the February Revolution, the First World War made the biggest contribution to the downfall of the monarchy and autocracy in 1917. However, despite the same problems being present in October due to the impact of the war, this revolution or ?coup? was more due to the failure of the Provisional Government to provide solutions and the timing of the Bolshevik uprising. The role of Lenin and Trotsky were also paramount to the Bolshevik take over, therefore it can be said that the First World War was responsible for the February Revolution to a large extent but in October 1917, less so, as other factors were contributed more substantially to the coup. ...read more.