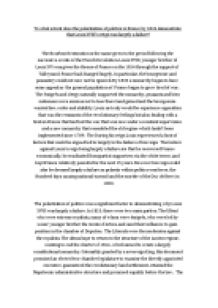 To what extent does the polarization of politics in France by 1824 demonstrate that Louis XVIIIs reign was largely a failure?

ï»¿To what extent does the polarization of politics in France by 1824 demonstrate that Louis XVIII’s reign was largely a failure? The Bourbon Restoration is the name given to the period following the successive events of the French Revolution. Louis XVIII, younger brother of Louis XVI was given the throne of France on the 1814 through the support of Talleyrand. France had changed hugely, In particular, the bourgeoisie and peasantry could not now not be ignored. By 1815 a monarchy began to have some appeal as the general population of France began to grow tired of war. The émigrés and clergy naturally supported the monarchy, peasants and bien nationaux were anxious not to lose there land gained and the bourgeoisie wanted law, order and stability. Louis not only would be experience opposition that was the remnants of the revolutionary feelings but also dealing with a broken France that had lost the war that was now under a constant supervision and a new monarchy that resembled the old regime which hadn’t been implemented since 1789. The During his reign Louis experienced a host of factors that could be argued led to largely to the failure of his reign. ...read more.

However the control of politics was largely down to the King himself who during this period was often under external pressures, form the allies, to promote a peaceful France, with an objective of political stability, one that would require a moderate position. Therefore due to the constant oscillations in political power Louis largely failed. The high point of polarization of politics was the murder of Duc de Berri in 1820. The Duc de Berri was significant as he was the only male member of the bourbons able to provide an heir. The Ultras unexpectedly took advantage of this, securing a dismissal of the moderate Decazes. His replacement , Richelieu, made electoral changes in favour of the wealthy, such as more censorship and additional rich deputies. This can be considered a turning point, as Louis could not longer resist the Comte d?Artois and the ultras. Additionally an assured heir, born in September 1820, added to the fears about where the government was going. The Hundred days can also be seen to create polarization of politics within France and can be seen to be a significant factor in Louis?s reign being largely a failure. ...read more.

In conclusion the reign of Louis can be largely regarded as a failure through the polarization of politics. In order to achieve political stability in the long-term, it was essential for the King to reconcile these two diametrically opposed groups, or at the very least act as a mediator in the inevitable conflicts that the split would create. Otherwise those conflicts could destroy the Restoration settlement. Louis XVIII was fully aware of this danger, insisting that his government's priority be to fuse the two groups. Unfortunately, in the aftermath of the "?Hundred Days', the Ultras used extra-parliamentary means to undermined this aim, fomenting widespread attacks on Liberals in the south of France. This ?White Terror' increased the perception amongst some of the politically active class that they were henceforth in danger from a monarchy, and were to be excluded from public life. The economic successes seen during the reign were limited and could be down to Napoleons actions rather than Louis himself. The reign of Louis was largely a failure as he failed to keep the country politically stable and by 1824 Frances political situation was largely Ultra, even with the moderate policies enacted over his reign. ...read more.