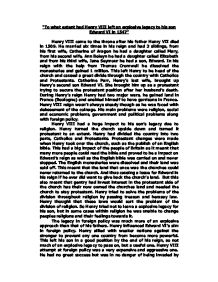 &quot;To what extent had Henry VIII left an explosive legacy to his son Edward VI in 1547&quot;.

"To what extent had Henry VIII left an explosive legacy to his son Edward VI in 1547" Henry VIII came to the throne after his father Henry VII died in 1509. He married six times in his reign and had 3 siblings, from his first wife, Catherine of Aragon he had a daughter called Mary, from his second wife, Ann Boleyn he had a daughter called Elizabeth and from his third wife, Jane Seymour he had a son, Edward. In his reign with the help from Thomas Cromwell he dissolved the monasteries and gained 1 million. This left Henry to be head of the church and caused a great divide through the country with Catholics and Protestants. Catherine Parr, Henry's last wife, brought up Henry's second son Edward VI. She brought him up as a protestant trying to secure the protestant position after her husband's death. During Henry's reign Henry had two major wars, he gained land in France (Boulogne) and enabled himself to have garrisons in France. Henry VIII reign wasn't always steady though as he was faced with debasement of the coinage. His main problems were religion, social and economic problems, government and political problems along with foreign policy. ...read more.

Henry VIII attempt at foreign policy was a very expensive and aggressive one. He had no great success but was in no danger of being invaded by the end of his reign. He used an explosive technique in the way in which he went about his foreign policy with wars with both Scotland and France. This left his son Edward to sort out the consequence of his father's legacy. Henry gained land in France, this turned out to be a very expensive cost for Henry as it meant he had to have garrisons within France to protect the land. This meant that his son was left with the expensive idea at the beginning of his reign. Henry also went to war with Scotland as part of his Foreign policy. He went in full force with this attack and again was very costly and required extensive amount of money to keep garrisons in Scotland as well. And as a result of Henry's actions it left Edward in the position of a Scot-French alliance. This meant that Edward had a impact from his father's foreign policy as he had many enemies which could cause to be explosive later on in his reign. ...read more.

This was a very explosive problem for Edward, as it enabled summerset to change plans in which Henry had made, and influence in into the protestant side of running the country. Henry can't be the blame for all the trouble he may of caused for his son, as the population rise in England couldn't of been helped. He had no control over the situation of the inflation and unemployment due to the fact he had no means to stop the sudden rise. Overall Henry did have an explosive legacy to an extent. If you compare Henry VIII to his father, Henry VIII legacy was a lot more expensive and aggressive and overall less successful. This left a huge problem for his son Edward. Henry left the country in a state of depression, a population problems, along with political and religious trouble that if not dealt with would prove to be explosive for Edward as many people were ready to revolt due to the high tax prices and Henry left his son with financial problems. On the other hand, Henry can't be blamed for this all as the population wasn't due to his running of the country and also he was successful in some ways such as making alliances with smaller nations, but other all Henry's legacy was explosive for Edward. ...read more.