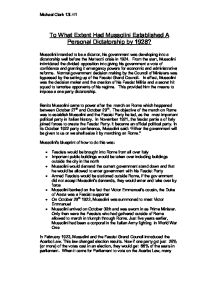 To What Extent Had Mussolini Established A Personal Dictatorship by 1928?

To What Extent Had Mussolini Established A Personal Dictatorship by 1928? Mussolini intended to be a dictator, his government was developing into a dictatorship well before the Matteotti crisis in 1924. From the start, Mussolini intimidated the divided opposition into giving his government a vote of confidence and granting it emergency powers for economic and administrative reforms. Normal government decision making by the Council of Ministers was bypassed by the setting up of the Fascist Grand Council. In effect, Mussolini was the decision maker and the creation of his Fascist Militia and a secret hit squad to terrorise opponents of his regime. This provided him the means to impose a one party dictatorship. Benito Mussolini came to power after the march on Rome which happened between October 27th and October 29th. The objective of the march on Rome was to establish Mussolini and the Fascist Party he led, as the most important political party in Italian history. In November 1921, the fascist parties of Italy joined forces to create the Fascist Party. It became an official political party. In its October 1922 party conference, Mussolini said: "Either the government will be given to us or we shall seize it by marching on Rome." ...read more.

People were intimidated into voting for the Fascists or that the Fascists took ballot papers from those who might have voted against Mussolini were brushed aside. The Fascists who were elected were bound to support Mussolini. In this sense, the Acerbo Law was an important move to dictatorship in Italy. I feel this makes Mussolini a Fascist dictator due to the fact that it allowed Mussolini and the Fascist Party to become the largest party in Italy and therefore it is not a personal method. On the 30th May 1924, the leader of the Socialist Unity Party, Giacomo Matteotti, made a speech in the Chamber of Deputies, criticising the violence and intimidation that had took place during the voting day and general election campaign from Fascist Blackshirts. After his outrage Matteotti and non-fascist political members left the Chamber of Deputies. Mussolini had to do something about this and on the 10th June 1924, Matteotti disappeared. He was spotted being bundled into a car. After the police began enquires, the car was found and the interior was full of blood. The car was traced back to a friend of Cesari Rossi. ...read more.

However this principle had been in effect since 1925 due to the fact that Mussolini established an electoral law which abolished parliamentary elections. I feel this makes Mussolini a personal dictator due to the fact that he wanted to be total ruler of Italy, he named himself head of the government and ensured that Fascism would not be overruled or destroyed due to the fact he abolished all other parties. Mussolini would of course have to have a fantastic relationship with the PNF due to the fact that it was his own party. The PNF popularized Mussolini and they built a strong faction with the Blackshirts to destroy socialism in the early days before the march on Rome. The PNF clearly won the highly controversial elections of April 1924. In early 1925, Mussolini dropped all ideas of democracy and set up a total dictatorship. From that point onward, the PNF was effectively the only legally permitted party in the country. I feel that this makes Mussolini a Fascist and a personal dictator due to the fact that he needed his party to take over the government but at the same time, used them to gain a stronghold over Italy. ?? ?? ?? ?? Michael Clark 13LH1 ...read more.