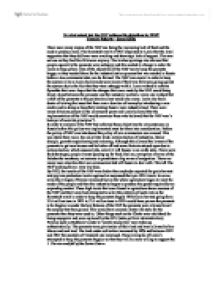 To what extent had the NEP achieved its objectives by 1924?

To what extent had the NEP achieved its objectives by 1924? Hannah Roberts - Jones 13Eld There were many origins of the NEP one being the increasing lack of food and the need to produce more. The Kronstadt revolt of 1921 displayed to Lenin that the loyal supporters that they did have were revolting and showing a lack of support. This was serious as they had few followers anyway. The tamber uprisings also showed that people especially the peasants were unhappy and this needed to change in order for Lenin to keep power. One of the objectives of the NEP was to keep the peasants happy, as they needed them for the industrialisation process that was needed in Russia before a true communist state can be formed. The NEP was crucial in order to keep the system alive as Lenin had already seen many of their true followers going against the system due to the fact that they were unhappy with it. Lenin wished to achieve Symchka that was a hope that the changes that were made by the NEP would bring about a bond between the peasants and the industrial workers. ...read more.

The rise and fall of the Soviet Union. Party do that the party can remain in control. . This was a success, as the peasants did seem to be more pleased with the party. One of the NEP's objectives was to make Russia more industrialised in order to move on to the final stage, which is a true communist state. Taking into consideration that the NEP was working from a very low base this can be seen as a success as widespread electrification was introduced, transport and communication also slowly improved as it was helped by the importation of over 1000 new engines from Germany and Sweden. This new equipment showed that Lenin was prepared for heavy industrialisation. Russia had become more industrialised as Steel increased from 183 thousand tons in 1921 to 3,141 thousand tons in 1926 this is an increase of 2,958 thousand tons. This shows that an attempt at industrialisation was a success. Through the NEP allowing the introduction of money being allowed this encouraged production levels to increase. This shows that Lenin stabilised the economy by giving the peasants purchasing power. This shows that the NEP achieved one of its objectives by attempting to solve the problem that money was devalued. ...read more.

This would have created a wide gap in the economic field especially. Many also feared that this would mean that the peasants would lose support for the party. The NEP didn't solve the economic problems facing Russia, as there was a reliance on small-scale farming most of which were uneconomic units. They simply couldn't produce the levels required for the transition to the desired communist state. This displays that the NEP failed to be able to be a path to the desired communist state as it created to many obstacles. In conclusion the NEP did improve the lives of some people especially after the effects of war communism. If they didn't so something in 1921 a revolution against them could have occurred and they would have lost power and the NEP prevented this. In the Marxist idea it includes a capitalist state and the only way to achieve this was through gaining capital through NEP. This could be seen that the NEP was vital for survival. However, the NEP in the long run created more problems the majority lying in the heart of the Marxist ideology. Although the NEP achieved some of its objectives such as stabilising Russia it created more obstacles that went against the party ideas. ...read more.