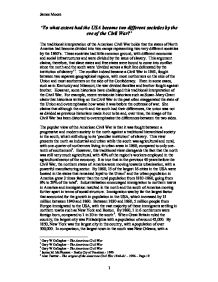 'To what extent had the USA become two different societies by the eve of the Civil War?'

'To what extent had the USA become two different societies by the eve of the Civil War?' The traditional interpretation of the American Civil War holds that the states of North America had become divided into two camps representing two very different societies by the 1860's. These societies had little common ground, with different economic and social infrastructures and were divided by the issue of slavery. This argument claims, therefore, that slave states and free states were bound to come into conflict since the north and the south were 'divided across a fault line delineated by the institution of slavery'1. The conflict indeed became a Civil War in 1861, fought between two separate geographical regions, with most northerners on the side of the Union and most southerners on the side of the Confederacy. Even in some cases, such as in Kentucky and Missouri, the war divided families and brother fought against brother. However, some historians have challenged this traditional interpretation of the Civil War. For example, recent revisionist historians such as Susan-Mary Grant claim that historians writing on the Civil War in the past often exaggerated the state of the Union and overemphasise how weak it was before the outbreak of war. She claims that although the north and the south had their differences, the union was not as divided as previous historians made it out to be and, over time, the image of the Civil War has been distorted to overemphasise the differences between the two sides. The popular view of the American Civil War is that it was fought between a progressive and modern society in the north against a traditional hierarchical society in the south, which still clung to its 'peculiar institution' of slavery. This view presents the north as industrial and urban while the south was agricultural and rural, with one-quarter of northerners living in urban areas in 1860, compared to only one-tenth of southerners2. ...read more.

The key issue in dispute was the south's reliance on slave labour against the north's abolition of slavery as an institution. A common view of the south prior to the Civil War was that all southerners were slave owners and the plantation was at the centre of every southerner's life. However, this was not the case, as only 25% of southern families owned slaves and approximately 60% of these 25% owned more than 5 slaves14. This could lead to the conclusion that most southerners were not involved in the slave industry and that it was only a minority of southerners that were active in the slave trade so there wasn't a great difference between the north and the south over the issue of slavery. However, although the majority of southern families did not actually own slaves, historians such as Alan Farmer argue that those who did not own slaves were as much a part of the slave process as those who did own slaves. Families who did not own slaves accepted the 'peculiar institution' as a way of life and feared the consequences of abolishing slavery on southern society and were more than happy in assisting slave owners by all means possible when slaves went missing. In much of the south, the plantation was at the centre of the community and as institutional law was less established in the south than in the north, the plantation was a cohesive force and often provided judge and jury, prosecution and punisher. As cotton was America's biggest export, low-cost methods of production were vital to keep America at the forefront of the cotton exportation business. This led cotton and slavery to become interdependent and the south relied on both slavery and cotton even more as the years went by because there seemed to be no other feasible option for the south in terms of production. Peter Batty and Peter Parish illustrate the point that slavery and cotton markets were at the heart of the southern economy as ...read more.