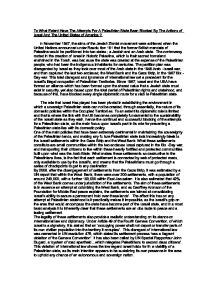 To What Extent Have The Attempts For A Palestinian State Been Blocked By The Actions of Israel And The United States of America ?

To What Extent Have The Attempts For A Palestinian State Been Blocked By The Actions of Israel And The United States of America ? In November 1947, the aims of the Jewish Zionist movement were achieved when the United Nations announced under Resolution 181 that the former British mandate of Palestine would be partitioned into two states ; a Jewish and an Arab state. The controversy rooted in the creation of Israel in historic Palestine, which is their sacred homeland enshrined in the Torah, was because the state was created at the expense of the Palestinian people, who had been the indigenous inhabitants for centuries. The partition plan was disregarded by Israel as they took over most of the Arab state in the 1948 Arab-Israeli war, and then captured the last two enclaves; the West Bank and the Gaza Strip, in the 1967 Six-Day war. This total disregard and ignorance of International law set a precedent for the Israeli's illegal occupation of Palestinian Territories. Since 1967, Israel and the USA have formed an alliance which has been formed upon the shared value that a Jewish state must exist in security, yet also based upon the total denial of Palestinian rights and statehood, and because of this, have blocked every single diplomatic route for a viable Palestinian state. The role that Israel Has played has been pivotal in establishing the environment in which a sovereign Palestinian state can not be created, through essentially, the nature of its domestic policies within the Occupied Territories. To an extent its diplomatic role is limited and that is where the link with the US becomes completely fundamental to the sustainability of the Israeli state as they wish, hence the continual and successful blocking of the attempts for a Palestinian state, so the main focus upon Israel's part in its role for preventing a Palestinian state lies with its domestic policy. ...read more.

700 M-60 Tanks and 6,000 armoured personnel, and also countless other machinery and artillery. A recent World Policy Institute study from 2006 explained that 'US arms and aid it provides gives the US substantial leverage' in Israeli policy. In a sense Israel has become an offshore military base for the US, and through its aid has built up the Israeli army to be the fourth biggest in the world. Just as the WPI explained in its report, this does give the US significant leverage in pushing for policy change, but through not doing so, it starts to become clear the role the US has played in blocking the attempts for a sovereign Palestinian state. The US has commented that the military aid is to 'help foster stability in a historically volatile region' and to 'support Israel's multi-gear defence modernisation plans', however 'promoting stability' isn't usually through supporting a brutal occupation which ironically will only cause only more instability to the region. It is not just the military support which continues the injustice to the Palestinians, and the complete resistance of any lasting settlement is also shown, but pivotally, the reason it is free from international prosecution is because of the way the US manipulates its global dominance in its diplomacy through international organisations such as the UN. Although this area will be looked at in more detail in how the UN is disregarded and ignored, there are a few striking examples which reiterate this support for Israel and blocking the attempt for Palestinian statehood. In 2000 the Bush administration vetoed a Security Council Resolution advanced by the EU, which called for implementation of Washington's Mitchell Plan and efforts to reduce violence by the dispatch of International monitors to reduce Palestinian terror and Israeli repression. It also boycotted a conference in Geneva of the High Contracting Parties of the Geneva convention which reaffirmed applicability of the 4th Geneva Convention to the Occupied Territories, so therefore the US-Israeli actions are war crimes under US law. ...read more.

If any quote gave the true intentions of Israel, it was this. Barak clearly indicated here that land illegally acquisitioned under international law was part of Israel. Chomsky explains that the 'wording [of the accords] made it clear that they were a mandate for continual Israeli settlement programs' and this increase in settlement activity 'proceeded steadily, with full US support' and all but 'blows the possibility of resolution of the conflict by peaceful diplomatic means'. The nature of the agreement and the consequences for a Palestinian state was a classic fa�ade which hid the true intentions of it. John Pilger called it 'a classic colonial fix where Arafat...got privileges of power while the mass of people got what an Israeli journalist called the autonomy of a PoW camp'. Tragically this was the case, and the illusion of peace was merely a distraction away from the consolidation of Palestinian land. It was also extremely successful in bypassing the implementation of resolution 242. As Robert Fisk stated, Whereas '242 demanded the withdrawal of Israeli forces from territory captured in 1967, Oslo permitted Israel to decide from which bit of the remaining 22% of Palestine they would withdraw' and let them 'renegotiate 242'. The Oslo Accords could have potentially been the heralding of a new era of compromise, with the Palestinian state being a reality, however it was merely manipulated by two nations pressured into conceding something, and if anything made the possibility of a Palestinian state even more unrealistic. The four areas investigated aimed to explore and understand the extent at which the attempts for a autonomous Palestinian state have been blocked by the roles of the US and Israel, and the results were consistently and brutally coherent. A blend of disregard for international law, the consequences of hegemonic politics, and the intent to deny a people the right to self government have caused sixty years of continual and sustained denial of Palestinian statehood. The epitome of the mind set taken by the United States Of America and Israel point towards Golda Meir's infamous statement; 'There is no such thing as a Palestinian people...'. ...read more.