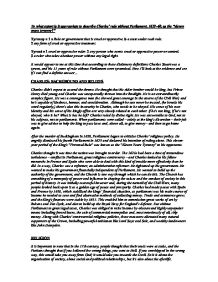 To what extent is it appropriate to describe Charles' rule without Parliament, 1629-40, as the &quot;eleven years tyranny?&quot;

To what extent is it appropriate to describe Charles' rule without Parliament, 1629-40, as the "eleven years tyranny?" Tyranny n 1 a Rule or government that is cruel or oppressive. b a state under such rule. 2 any form of cruel or oppressive treatment. Tyrant n 1 cruel or oppressive ruler. 2 any person who exerts cruel or oppressive power or control. 3 a ruler who takes absolute power without any legal right. It would appear to me at this time that according to these dictionary definitions Charles Stuart was a tyrant, and his 11 years of rule without Parliament were tyrannical. Now I'll look at the evidence and see if I can find a definite answer... CHARLES: BACKGROUND AND BELIEFS Charles didn't expect to ascend the throne. He thought that his elder brother would be king, but Prince Henry died young and Charles was unexpectedly thrown into the limelight. He is an extraordinarily complex figure. He was a courageous man (he showed great courage in the course of the Civil War) and he's capable of kindness, honour, and consideration. Although he can never be trusted, (he breaks his word regularly,) there's also this insecurity in Charles, who needs to be obeyed. His sense of his own identity and his sense of his kingly office are very closely related to each other. ...read more.

Whereas the gentry saw James' court as immoral it was however an open one (in stark contrast with that of Charles), and James made regular hunting trips around the country, and was in public view frequently. He even visited the country houses of the gentry and aristocracy, and invited them to court. Again, Charles in complete contrast rarely made public appearances and never visited the homes of his subjects. Indeed after Buckingham's death the court became a closed off 'inner circle' of advisers, bishops, generals, the Queen and who ever else Charles thought should attend. This made people fearful that popish plotters, catholic conspirators, evil counsellors and absolutists were monopolising the king's time, and adversely affecting the way the government worked and its policies. To an extent their suspicions were justified, for certainly at least 4 of the kings leading councillors were catholic (including, of course, the Queen) and many were absolutists, such as Wentworth. They were not however unified and were constantly conflicting with one and other, indeed there was intense rivalry rife among most of the court. The sensual, ceremonial aspects of Laudianism attracted Charles. He couldn't understand Puritanism. He thought Puritans were hypocrites. These were people who wanted to weaken the state and they were using the Church as a cloak for their political ambitions. ...read more.

to rule through fear, oppression and murder. However, Charles Stuart's tyranny obviously seems rather insignificant in comparison to that most infamous tyrant of not so long ago. This does not however mean that he wasn't a tyrant, just a much less tyrannical one than Mr Hitler! On the contrary, he was negligent in his position, as his rule for these 11 years was autocratic it is to an extent appropriate to give him the tyrant tag. For even if not directly responsible for the tyranny of this period many of his tyrannical policies were the result of his appointment of 'bad' advisers (such as William Laud and Thomas Wentworth), for whom he was ultimately responsible. I would therefore say, to a lesser extent than the modern tyrants, although there are some interesting parallels with Russia under Nicholas II (Both were unwilling monarchs who ended up dead at the hands of revolutionaries), Yes Charles was tyrannical. He did create an effective government which in earlier years would have been adequate, however his divine right ideas were antiquated and outmoded. Metaphorically, Charles was past his expiration date, and as a result turned rotten the whole structure of government and religion in Britain at this time. In conclusion, Charles was ruling in the past, and he had not evolved or attempted to evolve the office of king according to the changing beliefs and needs of his people, this made him a tyrant as he was ruling without regard for the people he claimed sovereignty over. ...read more.