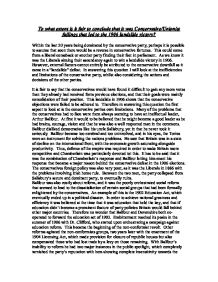 To what extent is it fair to conclude that it was Conservative/Unionist failings that led to the 1906 landslide victory?

To what extent is it fair to conclude that it was Conservative/Unionist failings that led to the 1906 landslide victory? Within the last 20 years being dominated by the conservative party, perhaps it is possible to assume that soon there would be a reverse in conservative fortunes. This could come from a liberal comeback or another party finding their feet in parliament. As we know it was the Liberals aiming their ascendancy again to win a landslide victory in 1906. However, external factors cannot entirely be attributed to the conservative downfall as it came in a "landslide" defeat. In answering this question I will look at the inefficiencies and limitations of the conservative party, whilst also considering the actions and decisions of the other parties. It is fair to say that the conservatives would have found it difficult to gain any more votes than they already had received form previous elections, and that their goals were mainly consolidation of their position. This landslide in 1906 shows that the conservative objections were failed to be adhered to. Therefore in answering this question the first aspect to look at is the conservative parties own limitations. Many of the problems that the conservatives had to face were them always seeming to have an ineffectual leader, Arthur Balfour. ...read more.

This proved to be a mistake with a wave of protest all over Britain, mainly die to the people becoming more aware of human rights. The outcry came form the conscience as the Chinese workers had to work in poor conditions in the most small and dangerous areas. Balfour could have rejected the idea, however to him the plan was effective and practical. On the 15th May 1903, Birmingham, Chamberlain declared his faith in "imperial preference" as he proposed to abandon free trade which had become a way of British life for fifty years. He believed that a system of duties would tie the overall empire together, raise revenue for social reform and protect British industry. The war on the Tariffs had started with Chamberlain seeing this move a way of solving the nation's problems whilst giving him individual gains, such as him being in the spotlight after fading with the climax of the Boer War. In July 1903 an outraged group of unionists began to set a Free Food League, and thus Balfour faced an extremely dangerous position. Bitter quarrels were beginning to form between those who endorsed free trade and those who were tariff reformers. Another massive blow to the conservative party under the controversies of tariff reform was the loss of Winston Churchill, who publicly showed the necks of the liberals, tariff reform became a rallying cry for conservatives and an electoral liability. ...read more.

The eventual agreement was signed in September 1903 with the main gist being that Labour would get a free run in some forty to fifty unionist seats in return for backing the Liberals elsewhere. The results of the 1906 elections were paramount to the pact made by the two parties, as the benefits affected both. Indeed the LRC and the Liberals were able to concentrate upon capitalizing on the new upshot of working class consciousness, which was shown in essence at the retaliation against the war fought for the rich capitalists of the Rand, the money making schemes of Chamberlain, the contemptuous nature against Labour with the enslavement of Chinese workers and the refusal to reverse the Taff Vale judgment. The reform issue was the final fault of the conservatives for the Liberals to pose the question. The 1906 elections was a disaster for Unionists whereas the liberals consolidate their strongholds whilst gaining in Lancashire, London and the southeast. In conclusion I believe that it was mainly due to the conservative failings that led to the 1906 landslide elections. The Tory party was headed by two main figures, Balfour and Chamberlain who brought the party to ruins preceding the rise in liberal fortunes headed by Salisbury. The liberal propaganda machine helped to put the conservatives to rest whilst they continued their uprising. The Liberal united around the conservative failings and this proved to be a force for both non-conformity and the working class. ...read more.