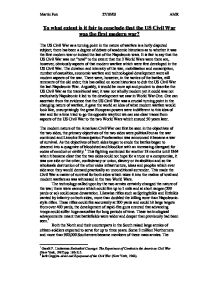 To what extent is it fair to conclude that the US Civil War was the first modern war?

To what extent is it fair to conclude that the US Civil War was the first modern war? The US Civil War as a turning point in the nature of warfare is a hotly disputed subject; there has been a degree of debate of academic historians as to whether it was the first modern war or indeed the last of the Napoleonic wars. It is fair to say that the US Civil War was not "total" to the extent that the 2 World Wars were there are, however, obviously aspects of that modern warfare which were first developed in the US Civil War. The duration and intensity of the war, mobilisation and conscription, number of casualties, economic warfare and technological development were all modern aspects of the war. There were, however, in the tactics of the battles, still remnants of the old order; this has called on some historians to dub the US Civil War the last Napoleonic War. Arguably, it would be more apt and prudent to describe the US Civil War as the transitional war; it was not wholly modern yet it could was not exclusively Napoleonic it led to the development we saw in World War One. One can ascertain from the evidence that the US Civil War was a crucial turning point in the changing nature of warfare, it gave the world an idea of what modern warfare would look like, unsurprisingly the great European powers were indifferent to this idea of war and for a time tried to go the opposite way but we ...read more.

It was propagated that not only would America be worse off if the states fell apart but it would be to the detriment of the whole world. With Lincoln's controversial emancipation proclamation again a large proportion of the North were motivated further. The south in turn used the idea of individual rights and the rights of individual states to build a sense of Southern nationalism. They promoted the idea of fighting to protect the "Southern way of life" and "Southern institutions". Lincoln's proclamation gave the North a moral high ground which would favour them for generations to come. The use of ideology and propaganda was not only essential for the US Civil War but also created a heightened modernity to the war. With all modern wars the Navy plays an important part and this was no different in the American Civil War. Both navies ordered new armoured ships powered by steam engines and the Union was at the forefront of a new design involving revolving turrets. The North used their warships to blockade the Confederate coast from Virginia to Texas, this had little initial success but by the end of the war the Union was stopping regular trade between the confederacy and foreign powers with 400 vessels forming the blockade. The US Civil War saw joint operations between the Navy and the Army with the Navy acting as a carrier to many troops and sometimes the frontline force against towns which were on the coast or on a river. ...read more.

Many of hem seem to have been cautious, some even refusing to fight if the odds of victory were not to their favour, the predominant military culture was rooted in a tentative and sedate style of war. The scale of the battles are also comparable to Napoleons era, the size of the army's which engaged each other are roughly the same and distances covered are also comparable. The use of steam-powered engines was, especially on the East, not needed as horsepower could have sustained these campaigns. The integrated movements of rail-born mobilisations witnessed in Lincolns' and Davis' America are not even closely comparable to that which was witnessed in Napoleonic France of 1870. In conclusion, one can see that there are significantly modern aspects to the American Civil War; however, historians such as Paddy Griffith have highlighted the holes in the assertion that it was the first modern war. Arguably the US Civil War was a transitional war, it was the war which created various revolutions and innovations which would lead to the two World Wars and their relative intensity and modernity. We can trace the changing nature of warfare from Napoleonic to Modern from the American Civil War. 1 Gerald F. Linderman Embattled Courage: The Experience of Combat in the American Civil War (New York, 1987) pp. 180-215. 2 Jack Coggins Arms and Equipment of the Civil War (New York, 1962). 3 Richard S. Hartigan Leiber's Code and the Laws of War (Chicago, Ill. 1983). 4 James E. Sefton, The United States Army and Reconstruction, 1865-1877 (Baton Rouge, La 1967); Joseph G. Dawson III, Army Generals and Reconstruction: Louisiana 1862-1877 (Baton Rouge, La 1982) Martin Fox 27/10/03 AMR ...read more.