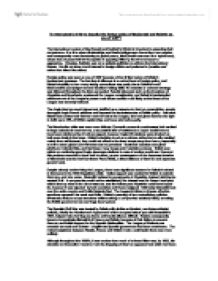 To what extent is it fair to describe the foreign policy of MacDonald and Baldwin as one of 'drift'?

To what extent is it fair to describe the foreign policy of MacDonald and Baldwin as one of 'drift'? The international context of MacDonald and Baldwin's Britain is important in assessing their competence. At a time when dictatorships and fascist rulings were becoming more popular, and consequently more threatening to global peace, MacDonald was seen as a 'spent force; whose lack of power left him incapable of opposing Hitler by the time he became aggressive,. Likewise, Baldwin was not a suitable politician to address the international threats. He did not show much interest in foreign affairs and preferred to 'preside over' rather than direct his cabinet. Foreign policy was seen as one of 'drift' because of the limited nature of Britain's involvement overseas. The forming of alliances is a central facet of foreign policy, and Britain's inability to form many strong connections was partly due to Baldwin's and MacDonald's poor judgement and decision-making skills. No resolute or coherent strategy was followed throughout the inter-war period. Fascist takeovers such as the invasions of Abyssinia and Manchuria, weakened the League considerably, and Britain's insubstantial reinforcement of the League's power made future conflict more likely as the threat of the League was severely reduced. ...read more.

Britain's pursuing of two contradictory policies (Pressurize Italy to accept sanctions whilst seeking a compromise solution) failed, revealing the British government as seemingly incompetent. The Spanish Civil War was treated by Britain with similar ambivalent, non-interventionist policies, chiefly the 'Gentleman's Agreement' which accepted status quo with Mussolini in 1937, helped make forming any future anti-fascist alliance difficult. Russia consequently became increasingly distrustful of France and Britain because of their failure to prevent German and Italian support for the Spanish Nationalists. The League of Nations was revealed as weak and useless - a legitimate Spanish government had been overthrown. The mutual suspicions between Russia, France and Britain made a anti-fascist front even more unlikely. Although throughout the 1920's, it was unclear how much of a threat Hitler was, by 1933, his elevation to Chancellor meant to most the dropping of German appeasement which had been previously justified as an attempt to support a democratic republic. However from 1933-35, the government showed little enthusiasm for active appeasement, despite Nazi foreign policies showing a certain moral flexibility, the brutality of the 'Night of the Long Knives' or the lack of pacific motivation behind the introduction of conscription or existence of the Luftwaffe for example. ...read more.

Complete reliance on peace-keeping of League of Nations, collective security through a series of regional alliances or appeasement. The League was seriously undermined by Britain's detached attitude and its consequent defeat in the Abyssinia and Manchuria crisis's. Alliances were seen by the public as one of the main reasons for WW1, and with the governments increasing reliance of the public's vote, they had to adopt a similar attitude in their policies. Also, alliances were uncoordinated and weak during the inter-war period, with double dealings (Naval Agreement) and surprising matches (Anti-Comintern Pact). SO despite being marked out as the main causes of WW2 and Hitler's ascension to Fuhrer, it seemed to be the only option left open to British politicians. Whether this is a result of an era of foreign 'drift' is debatable, however MacDonald and Baldwin's refusal to face some League-weakening conflicts, and the undertaking passive German appeasement does seem to out-weigh their measured actions, such as the disarmament talks and attempts at forming allies. The overall outcome of almost twenty years of this compromising foreign policy was grim, Britain had few allies, and faced three dictators - whose strength had grown due to British conciliation and isolation - with no US aid or reinforcement of a now shattered League. ...read more.