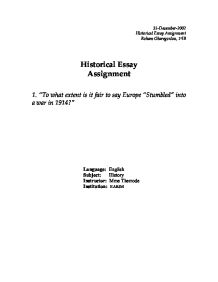 &quot;To what extent is it fair to say Europe &quot;Stumbled&quot; into a war in 1914?&quot;

31-December-2002 Historical Essay Assignment Roham Gharegozlou, 1oIB Historical Essay Assignment 1. "To what extent is it fair to say Europe "Stumbled" into a war in 1914?" Language: English Subject: History Instructor: Mme Therrode Institution: EABJM The so-called 'great war' of 1914-1918, also referred to as the First World War, came about through a complicated and amalgamated mass of different causes. There are those who now contend that the war was indeed inevitable, and yet others who maintain that it came about through a mere stroke of luck, or rather, misfortune. What the question put forward now is, whether or not the European powers, in 1914, actually "stumbled" into war. This would mean that the war was indeed an 'accident', brought about by ineffectual diplomacy and inept political governance. Undoubtedly the war's causes were deep-rooted, going back to the times of Otto Von Bismarck and the unification of Germany itself. One often-cited 'cause' of the War is the alliance system initiated by Bismarck: many assert that this divided the European Powers into two armed camps (that of France, Russia, and perhaps Britain, against that of Germany, Austria, and perhaps Italy), something that actually made war inevitable. ...read more.

Britain, intent on keeping a gigantic lead over its next 'competitor' in terms of sea-power, felt threatened by the Kaiser's Weltpolitik, or World Policy, which necessitated a large naval presence for Germany. It was perhaps this that really pushed Britain and made her firmly entrenched in the Entente camp of powers, but it hardly made a war necessary. Almost the same thing could be said about the arms race, in which the different powers were competing to amass the largest and most effective offensive arsenal. Having such an arsenal would not necessitate war, however: as demonstrated by the Cold War, an arms race does not unavoidably lead to conflict. It can in fact be used as a deterrent. Nevertheless, one must take into account that first of all, the only way a country could learn about another's military capability was through mainly spying. And if there was a lack of information, countries might get over-confident, and perhaps feel more ready to spark a conflict. This scenario actually came to pass in the First World War, with each country so confident in its own prowess that many thought the war was going to be over 'by Christmas'. ...read more.

Yet right afterwards, he tried to re-instate his order of partial mobilization again after hearing Germany was trying to restrain its ally. Indeed she was, but Russia's actions forced her to make a response, she sent an ultimatum to Russia demanding the retraction of Russian troops from the German border, an order which proved impossible, and so Germany was forced to declare war on Russia, bringing in France and later Britain as well. In view of all this evidence and opinion, it must be said that beyond a shadow of a doubt most major powers did not anticipate war before the July crisis in 1914 following the assassination of Franz-Ferdinand. However, it is possible to discern a train of thought in the minds of German diplomats especially that war would be beneficial, perhaps hinting that they were taking steps to ensure its coming-about. At first, no-one in Europe expected that such a local conflict would escalate into a Europe- and then a world- wide war. However, after the initial 'stumbling', so to speak, Germany especially pushed for war, rejecting peace attempts and guaranteeing the outbreak of war. Europe as a whole did 'stumble' into war, at least in its primary stages. But nevertheless there were people who prepared for it, and took advantage of its possibility when it came about. ...read more.