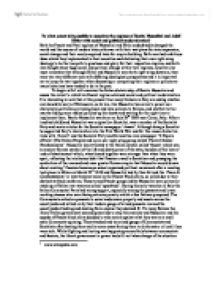 To what extent is it possible to associate the regimes of Benito Mussolini and Adolf Hitler with social and political modernization?

To what extent is it possible to associate the regimes of Benito Mussolini and Adolf Hitler with social and political modernization? Both the Fascist and Nazi regimes of Mussolini and Hitler undoubtedly changed the world and the course of modern history forever with their vast plans for state expansion, social change and their newly acquired taste for empire building. Both men had ambitious ideas which they implemented in their countries each believing their own right-wing ideology to be the true path to greatness and glory for their respective empires, and both men bought about huge social and political change within their regimes, however one must remember that although Hitler and Mussolini were both right-wing dictators, they were two very different men with differing ideological perspectives and it is important not to lump the two together when discussing or comparing their regimes or policies as many historians have tended to do in the past. To begin with I will examine the Italian dictatorship of Benito Mussolini and assess the extent to which his Fascist regime achieved social and political modernization. It is interesting to note that at this present time many thinkers in Italy are asking whether one should be wary of Berlusconi, as he too, like Mussolini has come to power as a charismatic politician promising hope and new policies to Italians, and whether he too may be hiding more radical policies up his sleeve and waiting for the right time to implement them. ...read more.

when they were caught up in the crossfire between KPD and SA members in the events of 'Bloody Sunday' in Altona on 17th July 1932.2 At this tense time of civil unrest, coupled with massive unemployment and widespread poverty, Hitler with his talk of restoring hope and pride to a weakened Germany was what many people saw as the antidote to Germany's disease. In 1931 Heinrich Bruning was the Chancellor of Germany, trying to sort out problem after problem, whilst President Hindenberg was becoming increasingly frustrated at Bruning's seeming inability to deal with Germany's economic and social problems. German's were not satisfied with the government, something highlighted when Bruning travelled around Germany his train had to have the blinds permanently drawn as whenever crowds caught sight of him they would often throw rocks. Bruning's political career abruptly ended when he was wrongly identified with plans put forward by the Minister for Labour, Adam Stegerwald, which included proposals to nationalize heavy industry. His enemies accused him of Bolshevism and after a curt interview President Hindenberg asked for his resignation. His replacment was Franz von Papen, a petty aristocrat with un-democratic views. After making no headway with new policies and being roundly humiliated in parliament by the Communists, Papen secretly met Hitler on the 18th January 1933. He agreed to let Hitler have the Chancellorship, in exchange for Papen becoming Vice-Chancellor, leaving Papen well positioned for when Hitler cracked under the strains of power. ...read more.

were friendly with the Nazis were able to buy up struggling regional newspapers so that eventually one company Eher Verlag and its associates controlled 82.5% of the German press. There was now a Reich Association of the German Press which all journalists were now part of, excluding the thirteen hundred Jewish and 'Marxist' journalists that had been sacked or fled the country by 1935. Only those who passed the Nazis racial and political screening could work as journalists at all, and they could not write anything even slightly critical of the government for fear of severe punishment. Under the October 1933 Editors Law the responsibilities of editors to the government became absolute and now whatever was published became the editors own legal responsibility, therefore placing the onus upon editors themselves not to let anything critical become published. The Nazis, unlike Mussolini and the Italian Fascists, had complete and utter control over the German media, and through such strong repressive measures they were able to achieve the changes they wanted to bring about. However although the Italian Fascists did arrest and execute opponents, their repression was not on the same scale as the Nazis, and I believe this was why they could not achieve the same level of change and modernization as the Nazis. To put it simply I belive the more repressive the regime and the more fear amongst the population, the easier it is to engineer social and political change. 1 www.wikepedia.com 2 The Third Reich- Michael Burleigh ?? ?? ?? ?? ...read more.