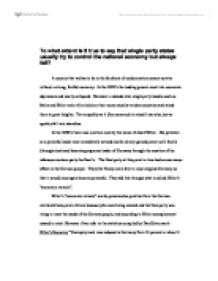 To what extent is it true to say that single party states usually try to control the national economy but always fail?

To what extent is it true to say that single party states usually try to control the national economy but always fail? A country that wishes to be in the forefront of modernization cannot survive without a strong, fruitful economy. In the 1920's the leading powers went into economic depression and nearly collapsed. However: a decade later single party leaders such as Stalin and Hitler took a firm hold on their economically stricken countries and raised them to great heights. Yet as quickly as it (the economy) is raised it can also just as quickly fall into shambles. In the 1930's there was a certain man by the name of Adolf Hitler. His potential as a powerful leader was immediately noticed and he slowly gained power until finally (through elections) becoming supreme leader of Germany through the creation of his infamous workers party the Nazi's. The Nazi party at this point in time had an enormous affect on the German people. ...read more.

But not even that was working because while "rearming", natural resources where running low and Hitler did not want the people of Germany to ration. (This was done by Hitler so that the people of Germany did not think that there country was in need of something) So Hitler had only one solution invade the Rhineland "because he know it would be extraordinarily popular within Germany and divert the publics attention from his domestic difficulties2" Roberts comments that "there are 34 vital materials without which a nation cannot live, and unfortunately, Germany is the worst off it has only two in ample quantities-potash and coal.2" Hitler's solution to this problem was war, as well as throughout the war maintain his four year plan. However as the war reached it's end in 1944 "it was obvious 'to all but fanatics [that] the war was economically lost'. Allied bombing had reduced oil supplies to a dangerously low level and disrupted transport facilities throughout the Reich, thereby dislocating the supply of coal, ...read more.

These goals were an almost impossible task yet factories achieved them, even if it meant sometimes cheating on the actual numbers. Yet if you didn't achieve the allocated goal or "target" or if you didn't show up for work you would be punished and sent off to the Gulags. All of these hard goals allowed for Russia's economy to boom when the others were in shambles. A strong economy is an essential playing ground for separating the seemingly strong country from a weak one. Yet to say that single party states usually try to control the national economy but always fail is a too broad of a statement. Germany although seemingly strong on the outside was very weak and corrupt inside, Yet Russia which was seemingly weak on the outside was strong in the inside. 1 Nazi Economics Reason Online magazine August/September 1999 2 Roberts Stephens The House that Hitler Built 3 Reich Marks-German Currency 4 Williamson D.G. The Third Reich Addison Wesley Longman Publishing Inc.,New York. 5 Joseph Stalin expressing his goal for Russia/5 year plan ?? ?? ?? ?? ...read more.