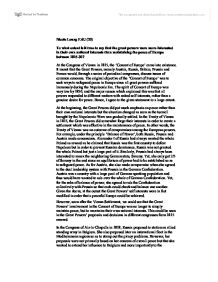 To what extent is it true to say that the great powers were more interested in their own national interests than maintaining the peace of Europe between 1815-30?

Nicole Leung F.6U (20) To what extent is it true to say that the great powers were more interested in their own national interests than maintaining the peace of Europe between 1815-30? At the Congress of Vienna in 1815, the 'Concert of Europe' came into existence. It meant that the Great Powers, namely Austria, Russia, Britain, Prussia and France would, through a series of periodical congresses, discuss issues of common concerns. The original objective of the 'Concert of Europe' was to seek ways to safeguard peace in Europe since all great powers suffered immensely during the Napoleonic Era. The spirit of Concert of Europe was very low by 1830, and the major reason which explained this was that all powers responded to different matters with naked self-interests, rather than a genuine desire for peace. Hence, I agree to the given statement to a large extent. At the beginning, the Great Powers did put much emphasis on peace rather than their own national interests but the situation changed as soon as the turmoil brought by the Napoleonic Wars was gradually settled. ...read more.

In the Congress of Aix-la-Chapelle in 1818, Russia proposed to station an allied standing army in Belgium. She also proposed later an international fleet in the Mediterranean regions so as to stamp out the piracy problems. However, her proposals were not primarily based on her concern of overall peace but that she wanted to extend her influence to Belgium and more importantly to the Mediterranean. Similarly, in the same congress, Castlereagh suggested that a naval force be appointed by the powers to search vessels for slaves. Yet, it was actually just Britain's excuse to gain more control in the commerce of other countries. Another significant example to demonstrate the Great Powers' exploitation of the Congress System was the formation of the Troppau Protocol in 1820. By that time, a lot of revolts had sprung up all over Europe, including the Italian states, the German States and Spain. The autocratic leaders, especially Metternich, were alarmed since they feared that these revolutionary sentiments would disseminate to their own countries and that their throne would be at risk. ...read more.

Britain who previously adopted the splendid isolation policy also actively took part in the intervention. That was because she was suspicious of Russia and realized that the best way to check against her was to work alongside with her. France, similarly, out of suspicion and the interest to come close to Britain, joined in the suppression of Greek revolt too. These countries' reactions in the Greek revolt were distinctively different to their proclaimed policies, thus showing what directed them in the congresses was not the desire to maintain peace, but their own self-interests. All in all, the fact that the Great Powers were more interested in their own interests instead of the maintenance of peace from 1815-1830 could be seen from their shifting alliances and policies. It was also because of these countries' unwillingness to give up their interests that ultimately led to the break up of the Congress System. The fact that the Congress System only lasted for 15 years best demonstrated how the countries were more concerned of safeguarding their national interests rather than working together for the maintenance of peace. Hence, the statement was true to a large extent. ...read more.