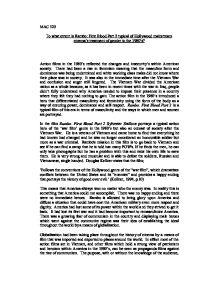 To what extent is Rambo: First Blood Part 2 typical of Hollywood main stream cinema's treatment of gender in the 1980's?

MAC 120 To what extent is Rambo: First Blood Part 2 typical of Hollywood mainstream cinema's treatment of gender in the 1980's? Action films in the 1980's reflected the changes and insecurity's within American society. There had been a rise in feminism meaning that the masculine form and dominance was being undermined and white working class males did not know where their place was in society. It was also in the immediate time after the Vietnam War and confusion and anger still lingered. The Vietnam War divided the American nation as a whole because, as it has been in recent times with the war in Iraq, people didn't fully understand why America needed to impose their presence in a country where they felt they had nothing to gain. The action film in the 1980's introduced a hero that differentiated masculinity and femininity using the form of the body as a way of ensuring power, dominance and self-respect. Rambo: First Blood Part 2 is a typical film of this era in terms of masculinity and the ways in which men and women are portrayed. In the film Rambo: First Blood Part 2 Sylvester Stallone portrays a typical action hero of the 'war film' genre in the 1980's but also an outcast of society after the Vietnam War. He is a veteran of Vietnam and came home to find that everything he had known had changed and he was no longer considered an honourable soldier but more as a war criminal. ...read more.

The villains are almost always portrayed as foreign internationals such as Russian, German, and sometimes English and they are usually a communist operative. They are never American in these films because the hero is American. He is fighting for his country and if it were another American he is fighting against he is effectively fighting against America. Other action films that were released at that time include, The Terminator, Rocky, Predator, and Die Hard. Millions of people worldwide, mainly consisting of young males went to see these films at the cinema. They gave them a chance to 'latch on to big, muscular, violent men as cinematic heroes.' (Katz, 1994, p134) These heroes gave the audience the chance to gain self-respect and security as it represented a masculinity that was unaffected by the rise of feminism. Gender roles had been reversed due to the growing rise of a feminist movement that showed women were increasingly moving into the workplace rather than staying at home. The displaying of the male physique and the physical torture it goes through to enable glory and victory over evil is further suggestive of masculinity in crisis and the gain of global respect. Women could not gain this kind of respect because they could not attain that degree of physical strength and endurance so therefore this was one thing that they couldn't take away from men. The female role in the action film of the 1980's appears at first glance to be on equal footing with the male. ...read more.

The fact that the superior build of the hero's body establishes him as an everyman means that it is something that any man can attain - as long as you are white. Black men are rarely portrayed in this manner and if they are they are usually the villains of the movie and end up being defeated. In conclusion, the gender representation in the film is an effort from the United States to fulfil the growing need of remasculinizing American society, in particularly, in the dominant white majority of the working class. With the rise of feminism, fear of communism, political scandals and the Vietnam War, it became imperative for America to try and rebuild the image of men in a positive light. Rather than focusing on men as a collective these films focused on one individual and therefore a view of machismo, strength and determination became the 'norm'. The films of the 1980's became a kind of vessel of the ideal and most of these films are still popular in today's society and may still be what some men aspire to be. If you were like these men you were considered to be manly and if you weren't you were understood to be weak and not the 'typical' American male. The male hero in these films was put there to win. America needed a hero and they found him in these films. The masculine form was in crisis and the wholesomeness and fearless heroes could make an impact on the male audience who would then seek to be like the characters they watched on screen. ...read more.

This is a strong response that shows detailed understanding of the film and places it in a social and historical context. More comparisons and examples would be useful to add weight to the evidence. 4 out of 5 stars.