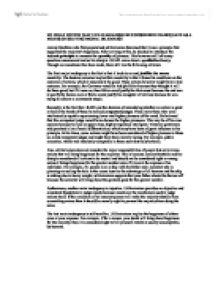 TO WHAT EXTENT MAY UTILITARIANISM BE CONSIDERED INADEQUATE AS A MEANS OF SOLVING MORAL DILEMNAS?

TO WHAT EXTENT MAY UTILITARIANISM BE CONSIDERED INADEQUATE AS A MEANS OF SOLVING MORAL DILEMNAS? Jeremy Bentham who first popularised utilitarianism theorised that it was a principle that supported the majority's happiness. After arriving at this, he decided to introduce the hedonic principle to measure the quantity of pleasure. This however still left many questions unanswered and so his disciple J.S.Mill came about a qualitative theory. Though an amendment has been made, there still lies the following criticism. The first major inadequacy is the fact is that it leads to an end justifies the means mentality. The hedonic calculus implied this mentality in that it based its conditions on the outcome of actions, which it assumed to be good. ...read more.

These were those who were intellectually capable experiencing lower and higher pleasures of the mind. He believed that this competent judge would have chosen the higher pleasures. This may be of his own opinion because he was an upper class, highly respected, intelligent, Victorian gentleman and practised a lot of social differentiation, which may have been of great influence in his principle. In his times, some actions might have been considered of higher pleasure to those so-called competent judges and might have been morally wrong. For example, public execution, which was absolutely acceptable in those years but truly barbaric. Also, utilitarianism does not consider the major responsibilities of people but only allows actions that will bring happiness for the majority. ...read more.

heavy weight, utilitarianism supports that your father should be thrown off because the scientist will bring about the greatest good for the greater number. Furthermore, another main inadequacy is injustice. Utilitarianism provides no objective and consistent foundation to judge results because results are the mechanism used to judge actions itself. If the execution of an innocent person will make the majority abstain from committing crimes then it should be morally right to prevent the majority from doing the same. The last main inadequacy is self-sacrifice. Utilitarianism implies the happiness of others even at your expense. For example, if for a reason, your death will bring about happiness for the majority, then it is considered right to kill yourself, which is usually unacceptable, by humans. ...read more.