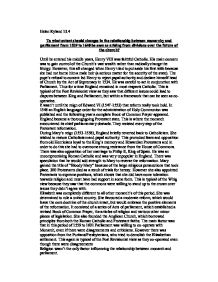 To what extent should changes in the relationship between monarchy and parliament from 1529 to 1640 be seen as arising from divisions over the future of the church?

Helen Ryland 13.4 To what extent should changes in the relationship between monarchy and parliament from 1529 to 1640 be seen as arising from divisions over the future of the church? Until he entered his middle years, Henry VIII was faithful Catholic. His main concern was to gain control of the Church's vast wealth rather than radically change the liturgy. However, this all changed when Henry tried to put aside his first wife because she had not borne him a male heir (a serious matter for the security of the state). The pope's refusal to consent led Henry to reject papal authority and declare himself head of Church by the Act of Supremacy in 1534. He was careful to act in conjunction with Parliament. Thus for a time England remained in most respects Catholic. This is typical of the Post Revisionist view as they saw that different issues could lead to disputes between King and Parliament, but within a framework that can be seen as co-operative. It wasn't until the reign of Edward VI (1547-1553) that reform really took hold. In 1548 an English language order for the administration of Holy Communion was published and the following year a complete Book of Common Prayer appeared. England became a thoroughgoing Protestant state. This is where the monarch encountered its chief parliamentary obstacle. They resisted every step of the Protestant reformation. During Mary's reign (1553-1558), England briefly reverted back to Catholicism. ...read more.

Henry joined the holy league intending to drive France out of Italy. He made peace with France after the marriage alliance of his sister Mary. But after the terms of his alliance with Spain expired, Henry declared war with France. The Scots refused to accept the marriage proposal of Henry's son for their daughter and he invaded and burned Edinburgh. He crushed an Irish revolt against the supremacy of England and acquired the title 'King of Ireland'. He divided the country into many provinces and included Wales with England. England was looked upon as the most important political nation of Europe, this increased parliaments co-operation with henry due to the status England had gained. Mary's marriage to Philip, King of Spain, in 1554 provoked a lot of discontent among parliament and the English public. They knew he would have influence over Mary's foreign policy. She was put under enormous pressure from Philip to declare war with France and by doing this, she put English foreign policy back to its traditional anti-French footing. Together, with Spain they achieved victory, but Spain was financially distraught and France had the ability to recover and seize Calais from England, a huge blow to England. This symbolised the limited role, which England could now play in Foreign affairs. This was humiliating to Mary, and the public proved her wrong. Elizabeth framed her foreign policy with the intense ambition that England should emerge as an important nation, socially, politically, religiously and economically. ...read more.

Factions developed as a result. The main individual in Mary's reign was her husband, Philip of Spain. He led her into war against the people's will. It ended badly as France recovered from the war and seized Calais from England. The Wentworth's were perhaps the most heroic figures during Mary's reign. They took the lead in defending free speech. They strove for full, free and unrestricted speech on all subjects. This backs up the Whig view as it shows parliament defending their rights and privileges. The Queen reacted by imprisoning them. It didn't have an effect on the House of Commons because they didn't see it as important, but they were heroic because they stood up to the Queen and no one had done that before. Burghley's demand for a triple subsidy provoked angry outbursts, furious debate and protest at the Lord's infringement of the Commons liberties. Norton was the best defence against Catholicism, making lots of speeches, written arguments and had the skill of a parliamentary draftsman. He had lots of support and had some success. Harsher penal laws were put against catholic recusants; he didn't have control over the commons though. After addressing all of the issues involved during this period, I believe that religion was not the most important or the only factor influencing changes in the relationship between monarchy and parliament from 1529 to 1640. I believe that the most important factors were other individuals because this caused the most conflict and constitutional issues, as this was the main factor for co-operation. Word Count: 2,450 ...read more.