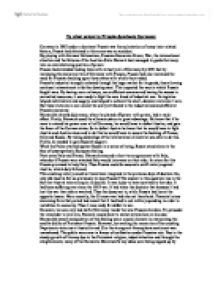 To what extent to Prussia dominate Germany.

To what extent to Prussia dominate Germany Germany in 1862 under a dominant Prussia was the culmination of many inter-related factors, Prussia had obtained in this arena was no accident. By playing with German Nationalism, Prussian Economic Power, War, the international situation and the failures of the Austrian State Bismark had managed to guide Germany into an overwhelming position of power. Prussia had extended trading links with virtually all of Germany by 1834 but by increasing the economic ties of Germany with Prussia, Prussia had also increased the need for Prussian backing upon those states with which they traded. Prussia's industrial strength rocketed through the huge market for its goods, thus allowing continual reinvestment in further development. This impacted the way in which Prussia fought wars. By having more railways, more efficient cannons and having the access to unrivalled resources, it was ready to fight the new breed of industrial war. Its logistics helped mobilization and supply, and helped to achieve the short, decisive victories it won. ...read more.

Thus it was ready for defeat in war. However, he now only had half of Germany inside the new Prussian borders. To persuade the remainder to join him, Bismark would have to evoke nationalism on his side. Bismarck's astute manipulation of this feeling was a crucial element in overcoming the south's dislike of Protestant Prussia. However, by evoking the memories of the crushing Napoleonic victories at Austerlitz and Ulm the strong anti-francophone sentiment was reawakened. The public were now in favour of unification under Prussian rule. Due to the steady growth of literacy due to the Protestant religion, industrialisation and through the enlightenment, many of the Romantic Movement's key ideas were being lapped up by eager Germans. The massive growth of the Railways in Germany, which by 1860 had reached the dizzying heights of 1163kmiii, only helped to spread these Nationalistic ideas. Thus with French hatred whipped up to a frenzy, all that the Prussian's needed to extend their influence was a war. Again by manipulating international affairs, Bismarck secured this. ...read more.

Bismarck' successful diplomacy and use of skills helped to extend Prussian power no end. His skills lay in his manipulation of public opinion. The use of short, successful wars such as in 1864 (with Denmark) and in 1866 (with Austria) helped to increase Prussian popularity. His careful use of the Schleswig-Holstein incident also helped his eventual aims. Diplomacy in the fields of war and enlargement were influential. By binding stated to Prussia using the Zollparlament, the Zollverein and the army, he increased the likelihood of unification under Prussian rule. His use of nationalism also was important to this end. As has been previously outlined, his use of foreign powers around wartime was also influential. We are shown this during the defeat of Austria, where he sought " to reserve the possibility of becoming friends" so that "she would [not] become the ally of France and of every opponent of ours. "iv So, in conclusion we can see the expansion of Prussian power being as a result of many things. The role of economics, diplomacy, nationalism, Bismarck, the international situation and war all played integral parts in the eventual establishment of the second German Reich in 1871. ...read more.