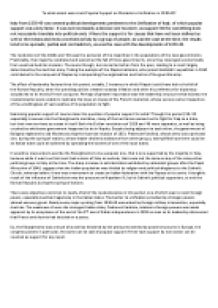 To what extent was a Lack of Popular Support an Obstacle to Italian Unification in 1830-49?

﻿To what extent was a Lack Popular Support an Obstacle to Unification in 1830-49? Italy from 1830-49 saw several political developments pertinent to the Unification of Italy, of which popular support was a key factor. It was not necessarily a decisive one however, as support felt for something does not necessarily translate into political ends. Where the support is for causes that have not been defined as well or the means and ends conceived as fully by a group of people, as was the case at the time, the results tend to be sporadic, partial and contradictory, as was the case with the developments of 1830-49. The revolutions of the 1820s and ?30s saw the exclusion of the majorities in the populations of the new governments. ...read more.

Examining popular support of course raises the question of popular support for what? Though this period (?48-?49 especially) is woven into the Risorgimento narrative, many of the territories seemed not to fight for Italy as a state, but their own territory as a state in itself. Both the Sicilian revolutions of 1820 and ?48 were separatist, as well as being crushed by whichever government happened to be in Naples. Despite being adjacent to each other, the government of Bologna neglected to aid Modena during the Austrian invasion of 1831. Piedmont-Sardinia, whose army was a personal one, during the spring of nations, whose leader declined assistance from other groups, exemplified how there could be an Italian state could be achieved by spreading the borders of one of the local states. ...read more.

There were objectives common to nearly of all of the revolutionaries in this period, one of which was to resist foreign power, especially Austrian hegemony in the Italian states. The barrier to unification provided by stronger powers abroad was very great. Nearly every major uprising from 1830-49 was ended by foreign military intervention, especially Austrian. The weakness of even the strongest Italian state; Piedmont-Sardinia, relative to foreign powers was made apparent by its acceptance of the end of the 2nd war of Italian independence in 1859 as soon as its leadership discovered that France and Austria had decided on a peace. So, the Risorgimento was a result of as well as hindered by the pressures exerted by power structures in Europe, the congress powers in particular, the same can be said of popular support if their tacit support by non-action can be counted as support for any result. ...read more.