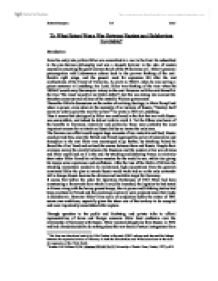 To What Extent Was a War Between Nazism and Bolshevism Inevitable?

To What Extent Was a War Between Nazism and Bolshevism Inevitable? Introduction: From his entry into politics Hitler was committed to a war in the East. He subscribed to the pan-German philosophy and was a staunch believer in the idea of eastern expansion emulating the great German Reich of the Wilhelmine era1. Hitler's personal preoccupation with Lebensraum echoes back to the pre-war thinking of the anti-Semitic right wings, and the general need for expansion felt after the vast confiscations of the Treaty of Versailles. As early as 1924/5, when he was serving a prison sentence at Landsberg Am Lech, Hitler was thinking of the time when the NSDAP would carry Germany to victory in the east. However as Hitler said himself at the time "the result would be inevitable defeat"; but this was taking into account the shrunken economy and military of the unstable Weimar government. Thereafter Hitler's discussions on the matter of realising ideology, in Mein Kampf and when in power, came down to the necessity of an invasion of Russia; "Destiny itself seems to wish to point the way for us here"2 he wrote in 1925 at Landsberg. Thus it seems that ideologically Hitler was confirmed in the fact that war with Russia was unavoidable, and indeed he did not wish to avoid it. Yet the F�hrer also knew of the benefits to Germany, materially and politically, these were probably the most important reasons for an attack on Russia but by no means the only ones. The German war effort would require huge amounts of raw materials and food, Russia could provide this; since the British and French appeased his policy of annexation and absorption in the east Hitler was encouraged to go further, by attacking Poland he forced the allies' hand and realised the unease between them and Russia. Despite their common enemy the enmity between the Russians and the western allies was obvious and Hitler capitalised on it in the end. ...read more.

Despite all the ideological causes of the Russian war, the fact still remains that the German premier decided to ally Germany with an, ideologically speaking, inferior country for political expediency, and, to a certain extent, desperation (since Britain refused to join the Germans). Hitler then went on to break the alliance, rather hypocritically given his previous analysis of Russian policy making "The present rulers of Russia have no idea of honourably entering into an alliance, let alone observing one."11 So the opening of Nazi-Soviet relations began in the late 1930's, Hitler having decided that an eastern alliance could benefit Germany by guaranteeing his eastern flank safe whilst the Fatherland's armies prepared to march into France, gaining half of Poland and the upper hand on mobilisation once Britain and France decided to act. Underlying the ruse of ideological reasoning was Hitler's knowledge that Russia was a rich source of raw materials; a good area for the mass colonisation and sprawl of the German people after the war was won. Although Lebensraum in the east was put across as an ideological concept for the Aryan warrior/farmer, (Blut und Boden) the crux of the wish for expansion into soviet lands was the gain in space. Hitler was desperate for a close empire of Germans to be powerful enough to challenge France and Great Britain, yet which was not spread across the globe like the British, or populated by inferiors and non nationals like that of the French in Africa. As early as 31st July 1940 Hitler was planning that a campaign against Russia would last for around 5 weeks. The motivation for this was mostly diplomatic12, Britain was holding resolutely strong and the Russian patience with German misdemeanours in Poland and Finland was wearing thin; Hitler sought to bring Britain to her knees by removing the eastern hope of the empire. The Russians were unperturbed at this time by Japanese proximity and Hitler began to fear soviet plans for expansion especially towards the Rumanian oilfields; hence the economic and political threat posed by the soviets was enough to ensure German plans and possible pre-emptive action. ...read more.

The F�hrer had originally planned for a war of ten to fifteen years, picking off the major powers from his base of western Europe, Overy suggests that the Reich from France and Scandinavia to the Polish and Czech regions would have constituted Hitler's new Nazi homeland from where he would take out almost at leisure the powers of Britain, the USA and the USSR15. However once general war broke out in 1939 war with Russia became unavoidable because Hitler had not the time to pick his enemies. Yet despite all the motives for war the one single factor, which must dominate over all the others, was Hitler's very own views, thoughts and methods of conveying them. Kershaw puts it most clearly in his biography of Hitler: "Economic, military, strategic and ideological motives were not separable in Hitler's thinking on the Soviet Union. They blended together, and were used by him with different strength at different times in persuading those in his company of the correctness and inevitability in his course of action."16 Showing that the standard of evidence, depth of analysis and quality of evaluation of any historian's account of Hitler and the war with Russia must take into account that the man's strength of mind and character would prevail over virtually any outside factor. Overall then, it is easy to see German requirements for war with Russia, indeed ideology was an important factor, yet inevitability was ensured by the ambition inherent in Hitler's dictatorship. Bibliography Noakes J & Pridham G (Ed.) Nazism 1919-45 Vol.3 (University of Exeter Press, Exeter, 1997) Kershaw I The Nazi Dictatorship Problems and Perspectives of Interpretation (Edward Arnold, London, 1989) Hildebrand K The Third Reich (George Allen & Unwin, London, 1984) Bullock A Hitler and Stalin Parallel Lives (Harper Collins, London, 1991) Kershaw I Hitler - 1936-1945 Nemesis (Penguin, London, 2001) Geary R Hitler and Nazism (Routledge, London, 1997) Hitler A (Trans. Manheim R) Mein Kampf (Hutchinson & Co, London, 1974) Overy R War and Economy in the Third Reich (Oxford University Press, Oxford, 1994) Words (Not inc. ...read more.