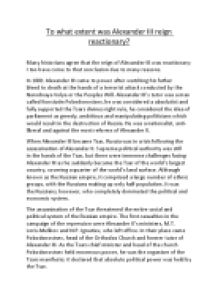 To what extent was Alexander III reign reactionary?

﻿To what extent was Alexander III reign reactionary? Many historians agree that the reign of Alexander III was reactionary; I too have come to that conclusion due to many reasons. In 1881 Alexander III came to power after watching his father bleed to death at the hands of a terrorist attack conducted by the Narodnaya Volya or the Peoples Will. Alexander III?s tutor was a man called Konstatin Pobedonostsev, he was considered a absolutist and fully supported the Tsars divines right rule, he considered the idea of parliament as greedy, ambitious and manipulating politicians which would result in the destruction of Russia. He was a nationalist, anti-liberal and against the most reforms of Alexander II. When Alexander III became Tsar, Russia was in crisis following the assassination of Alexander II. Supreme political authority was still in the hands of the Tsar, but there were immense challenges facing Alexander III as he suddenly became the Tsar of the world?s largest country, covering a quarter of the world?s land surface. ...read more.

involved setting up government controlled courts for trying government enemies which meant the government could arrest political criminals and try them without a jury, those convicted faced execution or being exiled to Siberia. The Okhrana (secret police) was also set up as part of the statue of state security. The government also took action to prevent the spread of radical and even liberal ideas. Press freedom was severely restricted, with fourteen major newspapers being banned between 1882 and 1889 for displaying ?liberal? tendencies. Foreign books and newspapers were also rigorously censored by the Okhrana in order to prevent dangerous foreign ideas, ideas such as democracy and parliamentary government, reaching the Russian people. Universities in particular were under strict government supervision, Fees were increased to only allow the very wealthy, and in in 1884 they lost self-control and became government controlled. ...read more.

In 1885 Russian was made the official language of the empire. All official documents had to be in Russian, and all other languages were forbidden in schools, even when other races were in majority. Areas which were badly affected were Poland, Estonia, Latvia and Lithuania. But the area that was one of the worst hit was central Asia?s (Kazakhstan and Azerbaijan) where many people were not only non-Russian but Muslim. It was the Jews, however, who suffered most under Alexander III. The majority of Russias Jews lived in the ?Jewish Pale?, which is now Belarus. Organised attacks on Jews greatly increased during the reign of Alexander III. These attacks (known as pogoroms) would involve a mob going into Jewish parts of town to beat, rob, rape and even kill Jews, Under Alexander III, many of these attacks were organised or approved by the government. Such was the intensity of persecution in the early 1890?s that thousands of Jews fled Russia for new lives in north America and Western Europe. ...read more.