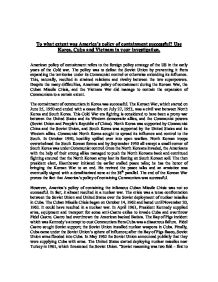 To what extent was America's policy of containment successful? Use Korea, Cuba and Vietnam in your investigation.

To what extent was America's policy of containment successful? Use Korea, Cuba and Vietnam in your investigation. American policy of containment refers to the foreign policy strategy of the US in the early years of the Cold war. The policy was to defeat the Soviet Union by preventing it from expanding the territories under its Communist control or otherwise extending its influence. This, naturally, resulted in strained relations and rivalry between the two superpowers. Despite the many difficulties, American policy of containment during the Korean War, the Cuban Missile Crisis, and the Vietnam War did manage to contain the expansion of Communism to a certain extent. The containment of communism in Korea was successful. The Korean War, which started on June 25, 1950 and ended with a cease fire on July 27, 1953, was a civil war between North Korea and South Korea. This Cold War era fighting is considered to have been a proxy war between the United States and its Western democratic allies, and the Communist powers (Soviet Union and People's Republic of China). ...read more.

Castro had overthrown the American backed Batista. The Bay of Pigs incident which was Kennedy's attempt to oust Communism from Cuba was a disastrous failure. Fidel Castro sought Soviet support; the Soviet Union installed nuclear weapons in Cuba. Finally, Cuba came under the Soviet Union's sphere of influence; after the Bay of Pigs fiasco, Soviet Union arms flooded into Cuba. In May 1962 the Soviet Union announced publicly that they were supplying Cuba with arms. The United States started deploying nuclear missiles near Turkey in 1961, which threatened the Soviet Union. "Soviet reasoning was two fold - first to defend this new socialist state from a United States or United States - sponsored invasion, and second, to restore the nuclear balance of power putting United States cities directly within the range of Soviet missiles." In Saturday 27 October, Kennedy ignored the second letter he received that day from Khrushchev. Instead he accepted the terms suggested by Khrushchev on 26 October, that is, "If assurances were given that the USA would not participate in an attack on ...read more.

By April, South Vietnamese army had fallen to the Communists. Vietnam was united by the North Vietnamese on July 2, 1976 to form the Socialist Republic of Vietnam. Communism had spread to Vietnam. In conclusion, American policy of containment of communism and Soviet's influence was not as successful as it was hoped to be. The Americans managed to contain the spread of Communism to a certain extent during the Korean War and to a limited extent during the Cuban Missile Crisis. One of the reasons for the South Korean success was that the Korean terrain was familiar and there was tremendous support from the Korean people. On the other hand, the Vietnam War was a thorn in the side because American troops were not familiar with the Vietnamese rainforest terrains. Despite setbacks in other areas, the American policy of containment was successful at keeping the Soviet Union from conquering American allies in Western Europe and North-east Asia. The spread and influence of communism was definitely curtailed and democracy thrived in many parts of the world. Joseph Shin ...read more.

The author structures this well and offers some valid points of analysis but this is largely a narrative account of the three events with only brief references to the question. 3 out of 5 stars.