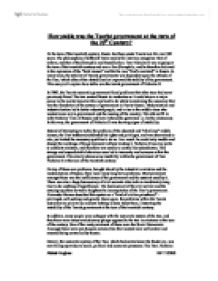 How stable was the Tsarist government at the turn of the 20th Century? At the turn of the twentieth century, Russia had been under Tsarist rule for over 300 years. The philosophies of different Tsars mainly fell into two categories: that of reform; and that of the Slavophile and Russification. Tsar Nicholas II was reigning at the turn of the twentieth century and was a firm Slavophile, and he therefore believed in the repression of the "dark masses" and that he was "God's anointed" in Russia. In many ways, the stability of Tsarist governments was dependent upon the attitude of the Tsar, which often either destabilized or improved the stability of his government. This essay will explore how stable was the tsarist government of Nicholas II. In 1900, the Tsarist autocratic government faced problems that other tsars had never previously faced. The tsar wanted Russia to modernise so it could stay as a major power in the world, however this was hard to do whilst maintaining the autocracy that was the foundation of the system of government in Tsarist Russia. Modernisation and industrialisation led to better-educated people, and a rise in the middle class who wanted more say in government and the running of the country. ...read more.

One of the most prominent of these were the Social Democrats. Amongst these were non-Russian nationalities that wanted more self-control and resented being controlled by Russia. Overall, the autocratic system of the Tsar, which had served since the feudal era, was now falling apart due to social, political and economic pressures. The Tsar, Nicholas was doing nothing to help it, in fact his support of Slavophilic policies (e.g. the repression of the dark masses), could have increased the speed at which the system, which he was trying to maintain, fell apart. Russia had an extremely feudal social system, which had remained largely unchanged for three centuries. This meant that Tsarist Russia was seen as a backward society by much of Europe. 77% of the population were peasants or serfs who were poor and illiterate. This poor quality of life, even at the best of times angered the serfs. Poor harvests led to starvation and uprisings amongst the lower classes, which were outraged by the fact that they starved whilst the aristocracy gorged themselves at lavish banquets and feasts. This created great instability. The government dealt with these problems using force, which, although stopping unrest in the short term, further created hatred for the tsar and his government. ...read more.

In conclusion, Russia and its government were not very stable at the turn of the twentieth century. Some problems had been around for centuries, while others were relatively short-term. The social and economic imbalance between the aristocrats and the general population, brought about by the autocratic system of government had been a major problem for centuries, whilst the inefficient and bureaucratic method of government only served to increase the speed at which the tsarist system of government decayed. As with the Roman Empire, once this had begun to happen, it was only a matter of time before revolution or invasion utterly changed the political climate of the country and its empire. The problem of modernisation also contributed to Russia's problems. Although Witte did his best to help Russia's economic problems, and the government was able to stop any opposition that would decrease stability in the country. Overall, in the end Russia was in terrible condition. It was extremely weak in political, social and economic terms, and with the rise in the educated middle class and revolutionaries, the tsarist government had become too unstable to have any hope of continuing as the same political system it currently was. Change was inevitable. ?? ?? ?? ?? Alistair Hughes 04/11/2008 ...read more.