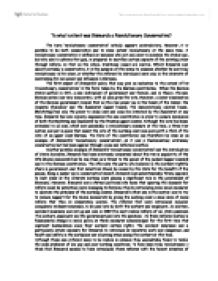 To what extent was Bismarck a Revolutionary Conservative

To what extent was Bismarck a Revolutionary Conservative? The term 'revolutionary conservative' initially appears contradictory. However, it is possible to be both conservative and to some extent revolutionary at the same time. A revolutionary conservative is defined as someone who not only aims to maintain the status quo, but who also to achieve this goal, is prepared to sacrifice certain aspects of the existing order through reform, so that on the whole, traditional values will survive. Whilst Bismarck was almost certainly a conservative, it is the purpose of this essay to examine whether he was truly revolutionary in his ideas, or whether the reforms he introduced were only in the interests of maintaining his own power and influence in Germany. The first aspect of Bismarck's policy that may give an indication to the extent of his 'revolutionary conservatism' is the form taken by the German constitution. When the German states unified in 1871, a new instrument of government was formed, and in theory, the new German nation was very democratic, with all men given the vote. However, a closer examination of the German government reveals that all the real power lay in the hands of the Kaiser, the Imperial Chancellor and the Bundesrat (upper house). ...read more.

In addition, accident insurance was set up and also in 1889 the most radical reform of all; state pensions. The workers, employers and the government paid into the pensions. All these reforms marked a fundamental change in social policy as these measures acknowledged for the first time that capitalist businessmen owed their workers certain rights. The accident insurance was a particularly astute measure for Bismarck to introduce as industrial work was dangerous, and health and safety in the workplace was a burning issue among the workers at this time. Although these new reforms seem to be radical in essence they undoubtably failed to tackle the main problems of low pay and poor working conditions. To have been truly revolutionary I think that Bismarck needed to have introduced these reforms with the honest intention of improving the lives of the working classes. I believe that a more cynical view of Bismarck's measures is appropriate and that the reforms were only brought in to maintain his own power and popularity. However, inadvertently his plans did in fact represent something revolutionary in European society, a first step on the road to the welfare state of the mid-twentieth century. His repression of socialism and the introduction of the Exceptional Laws is yet another example of Bismarck's policies that may reveal his political stance. ...read more.

However, his reaction to the situation seems to show no hint of revolutionary ideas or reform but gives a strong indication of Bismarck's traditional conservatism and authoritarianism. In conclusion I would say that Bismarck, was to a limited extent a revolutionary conservative. He used revolutionary methods such as the introduction of State Socialism and universal suffrage in order to maintain the dominance of the Prussian Upper Classes in Germany. In other ways, however, he showed no appetite for reform and appeared to be an extremely traditional conservative, such as in his reaction to the increasing power of the Catholic Church in Germany. In all his responses and ensuing policies Bismarck showed himself to be a shrewd and extremely able politician, possessing the ability to react quickly and effectively to the changing political climate in Germany, and to turn difficult circumstances to his own advantage. His forty years in office as the most powerful man in Germany stands testament to this. In his own words Bismarck revealed his true nature which was neither revolutionary nor conservative but pragmatic and realistic. "Politics are not like mathematics or arithmetic. It is true that in politics one has to calculate with known and unknown quantities at one and the same time, but there are no formula or rules by which one can work out the answer in advance". A Bolton ...read more.