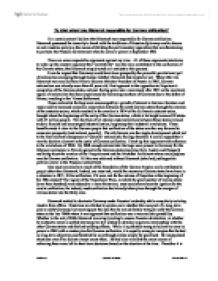 To what extent was Bismarck responsible for German unification?

To what extent was Bismarck responsible for German unification? To a certain extent I believe that Bismarck was responsible for German unification. Bismarck possessed the temerity to break with the traditions of Prussian diplomacy and to choose an anti-Austrian policy as the means of dividing the parliamentary opposition that was threatening to paralyse the Prussian Government when he came to power in September 1862 There are some respectable arguments against my view. All of these arguments intertwine to make up the counter-argument that 'inevitability' was the main contributor to the unification of the German states, that Bismarck simply acted as a catalyst to this process. It can be argued that Germany would have been grasped by the powerful gravitational pull of nationalism sweeping through Europe whether Bismarck had existed or not. When Otto von Bismarck was recalled from Paris to become Minister-President of Prussia in 1862, German nationalism was already more than 40 years old. First apparent in the opposition to Napoleon's occupation of the German states, national feeling grew into a movement after 1815 as the emotional appeal of nationalism had been experienced by increasing numbers of Germans due to the defeat of France, resulting in the Vienna Settlement. These nationalist feelings were encouraged by a growth of interest in German literature and music and by increased economic cooperation between the north German states through the creation of the customs unions, which resulted in the creation in 1834 of the Zollverein customs union, brought about the beginnings of the unity of the German states, which at its height covered 18 states with 23 million people. The abolition of all internal customs barriers between these states allowed trade to flourish and encouraged industrialisation, beginning their industrial revolutions. These benefits made it clear to the German people that unification of the states was the way forward to economic prosperity (and national security). The zZollverein was the single development which led to the first relevant emergences of 'German' nationalistic feeling; therefore it can be argued that it was the decisive element in the cycle of German unification. ...read more.

However Bismarck was not solely responsible for the unification of Germany. Nationalism in Germany with cultural and nationalising was the reason for the creation of the Zollverein, which was in many people�s views a major factor in the unification of Germany. The Zollverein allowed trade between the 39 German states by lowering the tax, which was set by the country very high. This brought the German states closer and with more unity. Prussia had increased its military power by increasing its army and when the northern German confederation was created. The Prussians had an army fit to face any European force. This lead to a unity between the northern German states. Since Prussia was in control of the northern German confederation then they were in a greater military position to unite Germany. Prussia also had a great economic development. Their money was getting greater and greater by the Zollverien, which made Prussia a very wealthy trading country. It also made all of the other countries tag on to Prussia, as they also wanted to be wealthy The proclamation of the German Empire in 1871 was the climax of a long process, to which several factors contributed. The growth of nationalism brought about the demand for a united country. Prussian economic development, aided by the Zollverien, allowed the build up of its military power and strengthened its influence, at least among the northern states. Together, these developments made possible unification under Prussian leadership, but they did not make it certain. What made Bismarck�s contribution decisive was his ability to exploit this potential for unity and to overcome the barriers, which still lay in the path of unification, especially the opposition of France and Austria. His diplomatic skills in isolating his enemies and his willingness to seize opportunities turned the possibility of unification into reality. When one considers the founding of the Germany as it is known today, we cannot fail to realise the most influential nation was Prussia. ...read more.

However, so much has been done to rebuild, particularly in the Reunification of East and West Germany by Helmut Kohl. Perhaps it was inopportune that Bismarck was born in Prussia, a very regimental and military society. Were some other nation to have been the founding strong nation of the unified Germany, perhaps such a military model would not have been impressed into the German identity of the early part of the century, and then perhaps the two world wars would not have occurred, particularly the second world war, wherein the population, recalling the 'glory days' of militaristic stability of the Prussian Kaiser, voted the militaristic NSDAP into power. However, it may justly be argued that a militaristic society would have been the only state possible to have brought about any sort of unity to Germany, for a military society was likely to be the strongest in Europe of the time. Indeed, stability was greatly sought by the German people through unification, and a military society would have been most able to maintain that stability. Bismarck, of course, must be honoured for his achievement of uniting Kleindeutschland. His was the first stable power to be found uniting the land, and although it may have been dictatorial, with him first engaging in a Kulturkampf against the Catholics, and then against the Socialists, his was, above all, unifying. The spirit of Bismarck does not lie in the politics of the nation, the borders, or even the culture. His legacy was simply a strong united Germany, with a new sense of identity for all persons within the borders of his Kleindeutschland. He truly was the father of modern Germany, but like all children, it has grown up, and, though it may look fondly back upon Bismarck, the nation perhaps must be a little glad to be free of Bismarck's iron grip as it now modifies its identity within the European Union. To what extent was Bismarck responsible for German Unification.doc 10/05/07 07:38hrs C.Bush WB L6 ...read more.