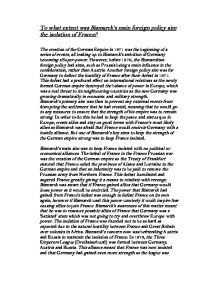 To what extent was Bismarcks main foreign policy aim the isolation of France?

To what extent was Bismarck's main foreign policy aim the isolation of France? The creation of the German Empire in 1871 was the beginning of a series of events, all leading up to Bismarck's ambition of Germany becoming a Super-power. However, before 1870, the Bismarckian foreign policy had aims, such as Prussia being a main influence in the confederation, rather than Austria. Another foreign policy aim was for Germany to deflect the hostility of France after their defeat in 1871. This defeat had a profound effect on international relations as the newly formed German empire destroyed the balance of power in Europe, which was a real threat to its neighbouring countries as the new Germany was growing dramatically in economic and military strength. Bismarck's primary aim was then to prevent any external events from disrupting the settlement that he had created, meaning that he would go to any measures to ensure that the strength of his empire was to remain strong. In order to do this he had to keep the peace and status quo in Europe, create allies and stay on good terms with France's most likely allies as Bismarck was afraid that France would encircle Germany with a hostile alliance. But one of Bismarck's key aims to keep the strength of the German empire strong was to keep France isolated. ...read more.

In March 1878, the Russo Turkish war ended with the signing of the Treaty of San Stefano. The Treaty Of San Stefano caused tension as large Russian client states were created in Serbia, Bulgaria, Montenegro and Romania which gave Russia great power in the Balkan states. The Austro-Hungarian Empire and many other European countries had many concerns about what Russia would do with the influence in the Balkans as Austro-Hungry had foreign policy aims in the Balkans itself. The power gained by Russia in the San Stefano caused an upset in the balance of power in Europe. Bismarck wanted to keep the balance of power in Europe and decided to take charge and call a congress in Berlin. This congress revised the Treaty of San Stefano and granted freedom for Serbia, Montenegro, Romania and Bulgaria. This congress took away power from Russia and neutralised the balance of power in Europe. Another foreign policy aim of Bismarck was colonial ambition as most powers wanted their place in the sun. Bismarck was officially against German colonisation as he believed and voiced that Germany was satiated with the unification and that protecting what he had created was key. However, Germany still gained several colonies under Bismarck's leadership. In 1878, the German African society was set up as Bismarck encouraged other powers to gain colonies. ...read more.

The threat of the navy was a big worry for Great Britain as the country is surrounded by water, making the access to British land more accessible. An Alliance was formed between Great Britain and France for security, despite the natural tension between the two powers of colonies in Africa. This alliance was a threat towards Bismarck as France was no longer isolated. In 1907 the Triple Entaint was formed as Russia formed the Alliance. All 3 powers joined together for the security from Germanys growing empire. I conclude that Bismarck had many foreign policy aims, but some historians believe that the isolation of France may have been the biggest as Bismarck keeping France isolated was key to his success of creating a strong empire. Also, the isolation of France meant that France would remain weak and even if she did want to take revenge, would not be capable of defeating Germany. However, other foreign policy aims are seen as just as important as the isolation of France, such as ensuring there was a balance of power in Europe. Bismarck needed to maintain the balance of power otherwise tension would form and Alliance's would be made which may result in Bismarck becoming en-circled and loosing economic and political strength. Also Bismarck's aim of keeping strong relations with Austria and Russia was also key as without the support of the other powers, the German empire would be left again with the threat of encirclement. ...read more.