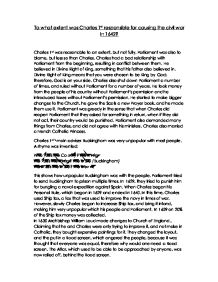 To what extent was Charles 1st responsible for causing the civil war in 1642?

To what extent was Charles 1st responsible for causing the civil war in 1642? Charles 1st was reasonable to an extent, but not fully. Parliament was also to blame, but less so than Charles. Charles had a bad relationship with Parliament from the beginning, resulting in conflict between them. He believed in Divine Right of King, something that his father also believed in. Divine Right of King means that you were chosen to be King by God; therefore, God is on your side. Charles also shut down Parliament a number of times, and ruled without Parliament for a number of years. He took money from the people of his country without Parliament's permission and he introduced taxes without Parliament's permission. He started to make bigger changes to the Church, he gave the Scots a new Prayer book, and he made them use it. Parliament was greedy in the sense that when Charles did reopen Parliament that they asked for something in return, when if they did not act, their country would be punished. ...read more.

In 1639 on 20% of the Ship tax money was collected. In 1630 Archbishop William Laud made changes to Church of England.. Claiming that he and Charles were only trying to improve it, and not make in Catholic, they bought expensive paintings for it. They changed the layout, and the put in a Rood screen, which angered the people, because it was thought that everyone was equal, therefore why would one need a Rood screen. The Altar, which used to be able to be approached by anyone, was now railed off, behind the Rood screen. Charles was popular for a while. He was modernising the city by building new roads. He repaired his broken relationship with his wife. More demands kept coming in from the Parliament and the Houses of Commons, then they had a meeting and they had a voting to see which side was favourite, it ended up Parliament winning by 159 votes to 148, this was called the Grand Remonstrance. ...read more.

They thought it was too close to the Catholics Prayer book. In February 1642 Parliament debated some questions of religious disagreement. Some of Parliament wanted to rid Archbishop William Laud, while others of bishops all together. Parliament gave Charles more demands again, this time 19, this quarrelling had split the country in two. The MP's who were on the kings side felt this was the ' last straw '. Charles said " this would make him a mere phantom of a king ". In June 1642, Parliament ordered that all of the county's of England to raise an army to fight. This meant people had a choice, a choice that would spilt families in half because of their views. Charles raised his own army, something that Parliament did not expect. The civil war began. Parliament had their way, and Charles was executed. My view is that Charles part of the civil was significant, but not largely more significant Parliament, they provoked him throughout his rule. They may have done this knowing that he was venerable, from his damaged childhood. ...read more.