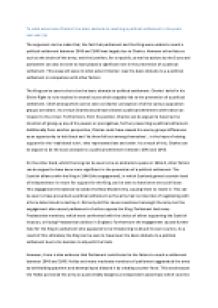 To What extent was Charles I the basic obstacle to reaching a political settlement?

The Scottish alliance with the King in 1646 (the engagement), in which Scotland gained a certain level of independence in return for support for the King, can be seen to have been one such factor. This engagement threatened to isolate the New Model Army, causing them to resent it. This can be seen to have prevented a political settlement as the army had no intention of negotiating with a force determined to destroy it. Not only did this cause resentment amongst the army but the engagement also caused parliament to further oppose the King. Parliament had many Presbyterian members, which were confronted with the choice of either supporting the Scottish invasion, or facing Presbyterian oblivion in England. Furthermore the engagement caused further hate for the King in parliament who appeared to be threatening to attack his own country. ...read more.