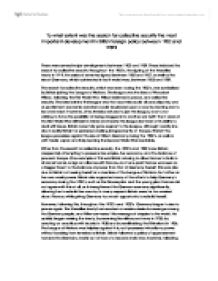 This was also due to Britain not seeing herself as a member of the League of Nations, but rather as her own world power. Britain also supported many of the efforts to help Germany's economy during the 1920's, such as the Dawes plan and the young plan. France did not agree with this at all, as it strengthened the German economy significantly, allowing her to rebuild her country. In many respects Britain were far too worried about France, while giving Germany too much opportunity to rebuild herself. However, following this, throughout the 1920's and 1930's Germany began to rise to power again. The Versailles treaty had created a massive desire for revenge among the German people, and Hitler conveyed this message of despise to the world. He quickly began revising the treaty, by rearming his military and navy in 1935, by creating an anschluss with Austria in 1938 and by remilitarizing the Rhineland in 1936. ...read more.

Despite all of these, the major development during the period of 1902 - 1939 has to be the rise of Germany, and the German question. Both the rise leading to world war one, led by Kaiser Wilhelm, and the rise leading to world war two lead by Hitler are of fairly equal importance, although it could be argued that the first of these rises led to the second, meaning it is of slightly higher importance. This also added a newfound relevance to the series of ententes signed between 1902 and 1907, as they allied a majority of Europe against Germany. Collective security was a big development, however at the time it was a fairly catastrophic failure. The Versailles treaty was also important, although Britain did not become too involved in enforcing these terms until it was too late to stop a full scale war. ...read more.