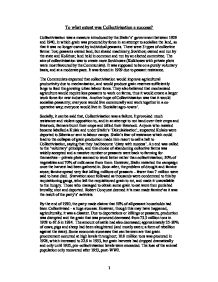 To what extent was Collectivisation a success?

To what extent was Collectivisation a success? Collectivisation was a measure introduced by the Stalin's' government between 1928 and 1940, in which grain was procured by force in an attempt to socialise the land, so that it was no longer owned by individual peasants. There were 3 types of collective farms: Toz; peasants owned land, but shared machinery, Sovkhoz; owned and run by the state and Kolkhoz; land held in common and run by an elected committee. The aim of collectivisation was to create more Sovkhozes (Kolkhozes with private plots were most favoured by the Communists). It was supposed to be on a purely voluntary basis, and at a moderate pace. It was forced in 1929 due to peasant resistance. The Communists expected that collectivization would improve agricultural productivity due to mechanisation, and would produce grain reserves sufficiently large to feed the growing urban labour force. They also believed that mechanised agriculture would require less peasants to work on farms, thus it would create a larger work force for new industries. ...read more.

However, though this may have happened, agriculturally, it was a disaster. Due to deportations or killings or peasants, production was disrupted and the grain that was procured decreased from 73.3 million tons in 1928 to 67.6 in 1934. The amount of cattle had also decreased; approximately 25-30% of cows, pigs and sheep had been slaughtered (and mostly eaten; a form of rebellion against the state). Some economic successes that can be seen are that grain procurement occurred at high levels throughout; 10.8 million tons was procured in 1928, which increased to 22.6 in 1933, but grain harvests had dropped dramatically and only until 1935, pre-collectivisation levels were exceeded. The loss of the animal population only recovered after 1953, post-WW2. Politically, Collectivisation was a success due to the fact that there were more officials now in the countryside's, who ensured that grain was obtained by force. This force showed that they had power over the peasants and every aspect of their lives. The countryside's were told that their existence was only to provide for the cities. ...read more.

Collectivisation did also bring some benefits to the countryside such as education. They also managed to gain control of the state- they gained political power as Collectivisation 'seemed to brutalise and perhaps to atomise the rural population'. However, not much foreign money was gained for grain exports as was hoped (to be used for industrialisation) due to economic problems in the west; the Great Depression reduced grain prices. Human costs were astonishing; thousand upon thousands died due to the Soviet Regime, hundreds were deported or sent to Gulag prison camps. Overall, I think that in order for the USSR to fulfil its aim of becoming an industrial nation, peoples lives and agriculture were sacrificed - It has been said that Stalin had clear economic and political motives, which he hoped to carry out once he was in power; he was aware of people's unwillingness to give up their land etc, thus he was prepared to use force in order to be successful. ?? ?? ?? ?? 1 ...read more.