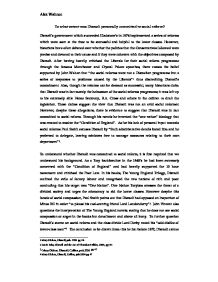 To what extent was Disraeli personally committed to social reform

To what extent was Disraeli personally committed to social reform? Disraeli's government which succeeded Gladstone's in 1874 implemented a series of reforms which were seen at the time to be successful and helpful to the lower classes. However, historians have often debated over whether the policies that the Conservatives followed were precise and devoted to their cause and if they were coherent with the objectives composed by Disraeli. After having heavily criticised the Liberals for their social reform programme through the famous Manchester and Crystal Palace speeches, there comes the belief supported by John Walton that "the social reforms were not a Disraelian programme but a series of responses to problems caused by the Liberals"1 thus discrediting Disraeli's commitment. Also, though the reforms can be deemed as successful, many historians claim that Disraeli was in fact merely the helmsman of the social reforms programme; it was left up to his extremely able Home Secretary, R.A. Cross and others in the cabinet to draft the legislation. These claims suggest the view that Disraeli was not an avid social reformer. However, despite these allegations, there is evidence to suggest that Disraeli was in fact committed to social reform. Through his novels he invented the "one nation" ideology that was created to resolve the "Condition of England". As for his lack of personal input towards social reforms Paul Smith excuses Disraeli by "Such administrative details bored him and he preferred to delegate, leaving ministers free to manage measures relating to their own department"2. To understand whether Disraeli was committed to social reform, it is first required that we understand his background. ...read more.

Also the government produced a lot of permissive legislation, such as the Artisan's dwelling Act which by 1881 only ten of the eighty seven towns to which it applied to had taken it up. Brasher points out that "The way in which Plimsoll had to struggle so hard in order to obtain the passage of the Merchant Shipping act of 1876, securing better safety for seamen, is equally significant in revealing the governments lack of independence on social issues" evaluates the efficiency of the government12. Despite Bruce Coleman's claims that the government also had to please the Conservative backbenchers who did not take kindly to higher taxes or responsibility, if Disraeli was truly committed to social reform, he would have made the legislation more effective. Further proof of Disraeli's uncommitted position on the topic of social reform has come from the legislation itself. Disraeli's commitment, or lack of it, is shown in how much personal exertion he put into the drafting of the Bills. Whilst he undoubtedly supported his cabinet ministers in the drafting of legislation, he himself took a rather 'back seat' attitude. In fact, much of it was due to the hard work of R.A. Cross. The fact that his cabinet ministers did much of the work, shows that Disraeli was not committed to social reform. Jenkins agrees that Disraeli was not very active in social reform and even fell asleep during cabinet discussions. Indeed in his acclaimed biography R.N.W Blake comments "it would be wrong to suggest that he played any great personal part in them (the social reforms), as he detested details, and his own interest was mainly in foreign affairs"13. ...read more.

Lord Blake identifies Disraeli's social philosophy as the "ability to counter-attack the real policy maker, Gladstone"25. This confirms Disraeli's showmanship as an aid for his ambitious opportunistic side, as it is clear he had no personal urge to "elevate the condition of the people", as the programme he used, involved no new principle and owed its origin chiefly to the ideas of his opponents. A point worth considering prior to concluding the verdict given to Disraeli's stance on social reform, is whether it is acceptable to allow the possibility that the "showman Disraeli" was committed to social reform, not on the basis of an ideological belief but because it was in his best interests to be. The depiction of the "showman Disraeli" shows the man "at the top of the greasy pole" who uses social reform as an instrument to gain political advantages through presentation and rhetoric charlatanism. Therefore surely it is feasible that this Disraeli is still committed to social reform, although for intrinsic needs. However, being "personally" committed to social reform, requires a genuine belief that it is a sound and needed policy to resolve the "condition of England". In conclusion Disraeli's commitment to social reform was dependable on when it would prove to be advantageous. Despite all allegations of opportunism, Disraeli's government produced a programme of legislation, which made a difference to his party's image for years to come. However Disraeli's background, whilst appearing to be commitment-based, was probably pure rhetoric and his speeches of 1872 nothing but political expediency. His motives behind the reforms, both political and social, point to the fact that the legislation was provoked more by his desire for votes than by his genuine concern for the plight of the working class. ...read more.