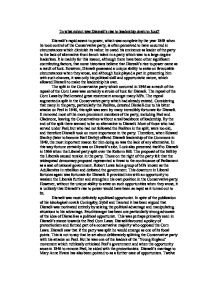 To what extent was Disraeli's rise to the leadership down to luck?

To what extent was Disreali's rise to leadership down to luck? Disreali's rapid assent to power, which was complete by the year 1868 when he took control of the Conservative party, is often perceived to have occurred in circumstances which diminish its value: he owed his eminence as leader of the party to the lack of alternative front-bench talent in a party which was to a large degree leaderless. It is mainly for this reason, although there have been other significant contributing factors, that some historians believe that Disreali's rise to power came as a result of luck. However, Disraeli possessed a unique ability to seize on favourable circumstances when they arose, and although luck played a part in presenting him with such chances, it was only his political skill and opportunistic nature, which allowed Disraeli to make the leadership his own. The split in the Conservative party which occurred in 1846 as a result of the repeal of the Corn Laws was certainly a stroke of luck for Disraeli. ...read more.

Disraeli was most definitely a political opportunist. In spite of the publication of his ideological novels Coningsby, Sybil and Tancred it has been argued that Disraeli was motivated entirely by seizing the political advantage and manipulating situations to his advantage. Feuchtwanger has been one particularly strong advocate of the idea of Disraeli as a political opportunist. This was perhaps primarily seen in Disraeli's stance towards the Peel Corn Laws. Disraeli favoured a policy of protectionism and formed part of a conservative majority who opposed the Corn Laws. Disraeli saw that if the party was split he would emerge as one of its focal points. This is not to say that he set about deliberately splitting the Conservative party with his attacks on Peel. But he was one of the leaders of the 'Young England' movement which ruthlessly criticised Peel's government and when the opportunity arose in 1846 to remove Peel, he sided with the protectionists. Disraeli's marriage to Mary Anne Evans has also been pointed to as a further case of opportunism. ...read more.

These proposals were most unusual for a Conservative budget and were responsible for the modernisation of the party which allowed the Conservatives to become an electable party again. Disraeli also possessed great skills as a political orator. This was witnessed in his attacks on Peel over the Corn Laws and generally he was a convincing speaker. However, he lacked the ability to produce anything as convincing as Gladstone's Midlothian Speeches for example, but he was aware of this and therefore ensured that he did not attempt to deliver out of his depth. The fact that he overcame his religious background, as well as coming from a background which was less moneyed than that of most conservative ministers(he only turned to literature as a career because he was so desperate for money), clearly highlights that Disraeli was not a man who rose to power through luck. Certain elements of his climb 'up the greasy pole' are said to have contained a certain degree of luck, including the split of the conservative party in 1846. However, Disraeli always used his opportunism and skill to make the best of these opportunities when they arose. He was a skilful politician and his modernisation of the conservative party clearly highlights this. ...read more.