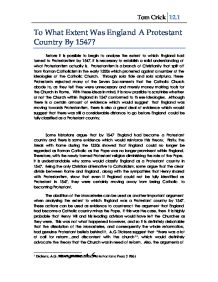 To What Extent Was England A Protestant Country By 1547?

To What Extent Was England A Protestant Country By 1547? Before it is possible to begin to analyse the extent to which England had turned to Protestantism by 1547, it is necessary to establish a solid understanding of what Protestantism actually is. Protestantism is a branch of Christianity that split off from Roman Catholicism in the early 1500s which protested against a number of the ideologies of the Catholic Church. Through sola fide and sola scriptura, these Protestants rejected many of the Seven Sacraments that the Catholic Church abode to, as they felt they were unnecessary and merely money making tools for the Church in Rome. With these ideas in mind, it is now possible to scrutinise whether or not the Church within England in 1547 conformed to these ideologies. Although there is a certain amount of evidence which would suggest that England was moving towards Protestantism, there is also a great deal of evidence which would suggest that there was still a considerable distance to go before England could be fully classified as a Protestant country. Some historians argue that by 1547 England had become a Protestant country and there is some evidence which would reinforce this theory. Firstly, the Break with Rome during the 1530s showed that England could no longer be regarded as Roman Catholic as the Pope was no longer prominent within England. Therefore, with the newly formed Protestant religion diminishing the role of the Pope, it is understandable why some would classify England as a Protestant country in 1547. ...read more.

Following the break with Rome, there were very few changes to the way the Church actually functioned. This runs parallel with the theory that Henry's break with Rome was not due to religious reasons, as there were few religious changes following this, but because he had "no legitimate male heir: [meaning] the Tudor dynasty was at risk"3, due to his desire to gain extra power within England and his requirements for extra finance to fund his expensive tastes and grand foreign policy. Many historians argue that throughout his life Henry had devout Catholic beliefs, but required the split to make his personal objectives a reality. This meant that once he was head of the Church, he did not feel that it was necessary to make any radical theological or doctrinal changes. All of this evidence would suggest that England did not actually change its beliefs to Protestantism, but was just no longer a part of the Roman Catholic Church. It is important to make this distinction, as many other countries in Europe were shifting to Protestantism due to their religious beliefs, and not for other non-religious reasons which were present within England. Despite the fact that the Bible was now being translated into the vernacular, there was little change in the personnel of the clergy or the way in which they went about their services. The traditional Roman Catholic procedures were still being undertaken, and yet for England to be classified as Protestant it would be necessary for these to end and the new Protestant actions that had become present in the Holy Roman Empire to come to the fore. ...read more.

These believers were in the minority, and therefore it is difficult for the whole country to be classified by their beliefs. With this in mind, it is certainly starting to become clear that England could not be called a Protestant country in 1547. On balance, the evidence would suggest that although in certain aspects England was becoming a Protestant country, it is difficult to argue that as a country England was Protestant by 1547. Although it is true to say that England was no longer a Roman Catholic country, it is best to say that England was in a state of Limbo, in other words England was no longer Catholic, yet had not fully introduced the ideas of Protestantism. It was certainly the case that following Henry's death the Reformers were able to take advantage of their increasingly strengthened position to convert England to a Protestant country, but it can not be said that England had been fully converted by 1547. 1 Dickens, A.G, The English Reformation, Fontana Press (1986) 2 Simon Fish on Clerical Vices 3 Guy, John, Tudor England, Oxford University Press (1990), p. 116 4 Servini, Peter, The Tudor Years (Lotherington Ed.), Hodder Murray (2003) 5 Davies, C.S.L, Peace, Print and Protestantism, Hart-Davis (1976), p. 188 6 Haigh, Christopher, English Reformations: Religion, Politics and Society Under the Tudor, Clarendon Press (1993) 7 Guy, John, Tudor England, Oxford University Press (1990), p. 178 ?? ?? ?? ?? Tom Crick 12.1 ...read more.