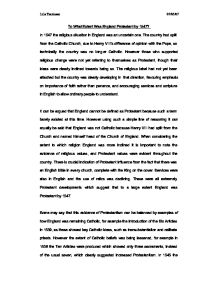 To What Extent Was England Protestant by 1547?

To What Extent Was England Protestant by 1547? In 1547 the religious situation in England was an uncertain one. The country had split from the Catholic Church, due to Henry VIII's difference of opinion with the Pope, so technically the country was no longer Catholic. However those who supported religious change were not yet referring to themselves as Protestant, though their ideas were clearly inclined towards being so. The religious label had not yet been attached but the country was clearly developing in that direction, favouring emphasis on importance of faith rather than penance, and encouraging services and scripture in English to allow ordinary people to understand. It can be argued that England cannot be defined as Protestant because such a term barely existed at this time. However using such a simple line of reasoning it can equally be said that England was not Catholic because Henry VIII had split from the Church and named himself head of the Church of England. ...read more.

His fifth wife, Catherine Howard, was also Catholic and had great influence over him. Some people may argue that if the monarch of a country is Catholic then the country must also be. However Henry was not consistent in his beliefs, both his fourth and sixth wives were inclined towards Protestantism, and he did close down the monasteries. The issue of why the monasteries were actually closed down, i.e. for religious or economic reasons, is debatable, but it must be pointed out that it does create flaws in the idea that he was strongly Catholic, if that was the case he would not have done so. The issue of Thomas Cromwell is also important here. In 1538 Cromwell was given a position where he had a great deal of influence over religious issues, and as he had Protestant beliefs this could indicate that the country was leaning towards Protestantism. ...read more.

Obviously some still felt ties to the traditional Catholic beliefs, but religious life had changed for ordinary people. Their church services were now in English, as were the bibles in their churches. Catholic shrines had been destroyed and people were being discouraged from purchasing relics or indulgences. Henry VIII, as opposed to the Pope was now the authoritative religious figure, and the monasteries were no longer in existence. The king's break from the church had allowed Cromwell and Cramner to use their influence to reflect the urge for religious change that was felt by the English people. By 1547 religious life and worship had shifted a great deal, and Protestant ideas were very valued, though the country was not yet officially 'Protestant'. However this name was only a technicality, and Protestantism seemed inevitable after Henry's death, considering the young impressionistic new king, the religious values of his advisers, and the feeling amongst the people of the country. Protestant ideas were distinctly felt by people throughout society, and the evidence backing this up is strong, and despite the erratic nature of Henry VIII, fairly consistent. Lula Teunissen 07/05/07 ...read more.