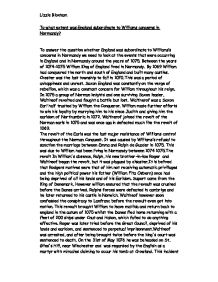 To what extent was england subordinate to Williams concerns in Normandy?

To what extent was England subordinate to Williams concerns in Normandy? To answer the question whether England was subordinate to Williams's concerns in Normandy we need to look at the events that were occurring in England and in Normandy around the years of 1075. Between the years of 1074-1075 William King of England lived in Normandy. By 1069 William had conquered the north and south of England and built many castles. Chester was the last township to fall in 1070.This was a period of unhappiness and unrest. Saxon England was constantly on the verge of rebellion, which was a constant concern for William throughout his reign. In 1075 a group of Norman knights and one surviving Saxon leader, Waltheof revolted and fought a battle but lost. Waltherof was a Saxon Earl half trusted by William the Conqueror. William made further efforts to win his loyalty by marrying him to his niece Judith and giving him the earldom of Northumbria in 1072. Waltherof joined the revolt of the Norman earls in 1075 and was once again defeated much like the revolt of 1069. The revolt of the Earls was the last major resistance of Williams control throughout the Norman Conquest. It was caused by Williams's refusal to sanction the marriage between Emma and Ralph de Guader in 1075. ...read more.

Yet again, William moved swiftly and moved land and sea forces north to invade Scotland. The Treaty of Abernethy in 1072 marked a truce, which was reinforced by Malcolm's eldest son being accepted as a hostage. These events showed Williams's strength in managing invasions and threats to his power. Previous rebellions had no structure or clear leader to them, however this one did and being that the leader was a king the leader should have been strong, this showed Williams ability to crush opponents. The idea of a future possible rebellion threat was a concern for William, which he must have been aware of whilst he lived in Normandy with his family. Williams's enemies in France were becoming more powerful as he ruled England. "Pre battle of Hastings" William had 2 main rivals (from the 1050s) the French Monarchy and the county of Anjou. William lost the alliance of Flanders. The succession to Baldwin V, father of Matilda, was to the advantage of Robert le Frison, an enemy of the Duke of Normandy, following the disaster of the Norman Cassel expedition (1071). William also risked losing Maine, His predominant buffer against his enemies of Anjou and Blois. The Count of Anjou came to the aid of the burghers of Le Mans who were hostile to the Normans. ...read more.

After Williams death His eldest son inherits Normandy. In those times the eldest son would have been left what was most important in there fathers will in this case Normandy. This tells us that Normandy was priority to William as he leaves it to his eldest son. All these difficulties were played out on the borders. Within the Duchy the authority of William was complete. This was further demonstrated at the Council of Lillebonne in 1080. Favourable to the reform of the conduct and discipline of the clergy he refused to surrender to the Pope his control over the ecclesiastical hierarchy. Overall in my opinion William felt that his main concerns laid in his dukedom of Normandy. His previous weak rivals had gained power and now had become a threat to his power (the French Monarchy and Count Anjou). He also had family quarrels to extinguish and family was a major concern for William. Over the channel William only had rebellions to deal with, he had a lot of men in his court of whom could easily crush these rebellions. William had built castles in England to enforce his power so England was not as big a concern for William. Some sources such as "difficult times" belive that Normandy was a bigger concern for William however others may belive that they were both major concerns for William and that he did well in juggling them together. Lizzie Bloxham ...read more.