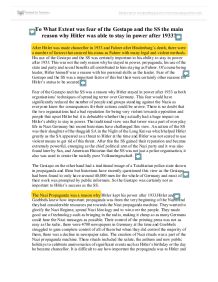 To What Extent was fear of the Gestapo and the SS the main reason why Hitler was able to stay in power after 1933?

To What Extent was fear of the Gestapo and the SS the main reason why Hitler was able to stay in power after 1933? After Hitler was made chancellor in 1933 and Fuhrer after Hindenburg's death, there were a number of factors that secured his status as Fuhrer with many legal and violent methods. His use of the Gestapo and the SS was certainly important to his ability to stay in power after 1933. This was not the only reason why he stayed in power, propaganda, his use of the state and party and social benefits all contributed to him staying as Fuhrer. Of course being leader, Hitler himself was a reason with his personal skills as the leader. Fear of the Gestapo and the SS was a important factor of this but their were certainly other reasons for Hitler's status to be secured. Fear of the Gestapo and the SS was a reason why Hitler stayed in power after 1933 as both organisations' techniques of spreading terror over Germany. This fear would have significantly reduced the number of people and groups standing against the Nazis as everyone knew the consequences for their actions could be severe. There is no doubt that the two organisations had a bad reputation for being very violent towards opposition and people that upset Hitler but it is debatable whether they actually had a huge impact on Hitler's ability to stay in power. ...read more.

There had been few changes to the civil service and it had become less important as was the local government which as long the Gauleiters were taking Hitler's ideas then the local government didn't pose any threat to the Nazis. The SS and Gestapo had been used to bring the courts and legal system in order as they dealt with enemies to the party and this secured control for the Nazis. The party and the state clashed, which was called dualism and confusion was created as their was often two different views on how to run the country The party strengthened the Nazi regime by being turned into more than just an organisation and competing for influence over the established state institutions. The Nazis used social benefits as another method of persuading Germans to support their regime. It was a plan called 'Volkmeingeschaft'and it was a number of plans, each specifically aimed at a social group such as small farmers or big businesses. For Industrial workers, they abolished Trade unions which already was a move that the workers would have been unhappy at this decision but the Nazis set up the DAF, German Labour Front. And the 'Beauty of Labour', which both attempted to improve working conditions. ...read more.

It is clear that is not certain that he was the powerful leader he was originally thought to be but even though many historians have had their doubts and contrasting views, he must have had a reasonably good image and leadership skills to control the country in the way he did as he did have unlimited power. There were many reasons why Hitler was able to stay in power after 1933, propaganda may not have had a huge influence over this but factors such as the use of the state and party and the use of social benefits helped Hitler. Hitler himself is a debatable factor as many historians such the structuralists have said he was a weak factor but the traditional view was that he was a strong leader with a good image which would have undoubtedly helped him. Fear of the SS and Gestapo was an important factor as both organisations, particularly the SS made an impact on everyday lives of the German people making sure they knew the consequences of actions that opposed or upset Hitler, in Pastor Niemoller's famous poem he had said that most Germans were grateful that they were not being targeted like the many scapegoats in the country at the time so were accepting of the Nazi regime. ...read more.

Although this essay is very detailed and very long it is missing the key ingredient of an argument about the relative importance of the different factors. Good A level history essays do not require candidates to write everything they know about a topic. An argument must be set out and then material from the period selected with discrimination and used to develop the key points. This essay could have focused on the factor given in the title and measured its impact and importance against only two or three other factors. This would have given the candidate time to evaluate the impact of the factors and the links between them. ****