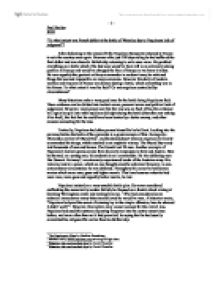 &quot;To what extent was French defeat at the battle of Waterloo due to Napoleons lack of judgment&quot;?

"To what extent was French defeat at the battle of Waterloo due to Napoleons lack of judgment"? After abdicating to the island of Elba Napoleon Bonaparte returned to France to rule the country once again. However after just 100 days ruling he had suffered the final defeat and was aboard a British ship returning to exile once more. He gambled everything on a battle which if he had won would've have left in an extremely strong position in Europe and would've changed the face of Europe as we know it today. He was arguably the greatest military commander in modern times; he achieved things that seemed impossible on many occasions. However this deity of modern warfare and Emperor of France was beaten during a battle, which everything was in his favour. To what extent it was his fault? Or was napoleon controlled by circumstances? Many historians make a very good case for the battle being Napoleons fault. There evidence can be divided into tactical errors, personal errors and political lack of judgement. However, many people see that the loss was no fault of his; this evidence will again be split into what napoleon did right during the battle (therefore not making it his fault), the fact that he could have been beaten by a better enemy, and other reasons accounting for the loss. Tactically, Napoleon had often proven himself to be brilliant. Looking into his previous battles the battle of the pyramids is a good example of this. Facing elite Mameluke cavalry of Murad Bey1, and hardened desert veterans napoleon brilliantly commanded his troops, which resulted in an emphatic victory. The Murad Bey army lost thousands of men and horses. The French lost 29 men. Another example of Napoleon's tactical genius comes from his early campaigns in Italy and Austria. Here he showed, as a young man, his credentials as a commander. He was defeating men like General Alvinczy2, an extremely experienced leader of the Austrian army. ...read more.

However whilst saying that Napoleon was 46, the same age as Wellington who had no such troubles. His army needed strong leadership, which he failed to give, and this could have been a decisive reason for the loss. Wellington said, "he has the affect of 40000 men on the battlefield, he drives men to do extraordinary things"14 Speaking after waterloo Wellington would've obviously played up Napoleons affect on a battle, he was a dramatic person, but to a certain extent his comments do ring true; the sheer presence of Napoleon had a great affect on his troops. The reasons heavily documented above show lots of reasons on the battlefield for why napoleon lost due to a lack in his judgement. However, to what extent was the failure before the battle even took place? Perhaps the failure came in the form of Napoleon having to fight in the first place; was the defeat caused by Napoleons lack of diplomacy? On coming back to France and seizing power Napoleon had upset many of the large nations in Europe, including the Prussians and the British. They had all been instrumental in getting Napoleon to abdicate in the first place. Therefore, his returning made war inevitable; whatever Napoleon did the allied nations of the seventh coalition was determined to remove him from power. Because of this it is hard to see, other than him abdicating for a second time, how France could've avoided going to war. This leads me to believe that Napoleon had not failed politically, and the failure was located on the battlefield. There is a very good case to suggest that napoleon had been to blame for the defeat at waterloo. However there is an equally good one to suggest the loss had been no fault of his. This based around what napoleon did right during the battle, the fact that he could have been beaten by a better enemy, and other reasons accounting for the loss being no fault of Napoleons. ...read more.