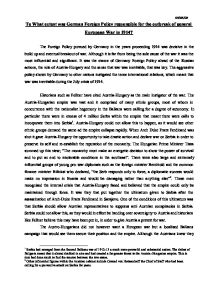 To What extent was German Foreign Policy responsible for the outbreak of general European War in 1914?

To What extent was German Foreign Policy responsible for the outbreak of general European War in 1914? The Foreign Policy pursued by Germany in the years proceeding 1914 was decisive in the build up and eventual breakout of war. Although it is far from being the sole cause of the war it was the most influential and significant. It was the stance of Germany Foreign Policy ahead of the Russian actions, the role of Austria-Hungary and the sense that war was inevitable, that was key. The aggressive policy shown by Germany to other nations instigated the tense international relations, which meant that war was inevitable during the July crisis of 1914. Historians such as Fellner have cited Austria-Hungary as the main instigator of the war. The Austria-Hungarian empire was vast and it comprised of many ethnic groups, most of whom in concurrence with the nationalist hegemony in the Balkans were calling for a degree of autonomy. In particular there were in excess of 4 million Serbs within the empire that meant there were calls to incorporate them into Serbia1. Austria-Hungary could not allow this to happen, as it would see other ethnic groups demand the same ad the empire collapse rapidly. When Arch Duke Franz Ferdinand was shot it gave Austria-Hungary the opportunity to take drastic action and declare war on Serbia in order to preserve its self and re-establish the reputation of the monarchy. The Hungarian Prime Minister Tisza summed up this view; "The monarchy must make an energetic decision to show the power of survival and to put an end to intolerable conditions in the southeast". There were also large and extremely influential groups of young pro-war diplomats such as the foreign minister Berchtold and the common finance minister Bilinksi who declared, "the Serb responds only to force, a diplomatic success would make no impression in Bosnia and would be damaging rather than anything else"2. ...read more.

These alliances were however purely defensive at heart, they were designed and signed in order to prevent the outbreak of war. More significantly there were not particularly binding. Russia showed this in 1913 when if failed to support Serbia. In 1914 the majority of the powers that were to become involved preferred peace and in the case of Austria it only wanted a localised war in the Balkans. Germany manipulated its ally and it was the aggression Germany showed therefore that persuaded the other 'great powers' that they had to make a stand. It should be argued that German Foreign Policy that played the instrumental role in the escalation of war had its roots in the 19th century. Otto von Bismarck had unified Germany in 1871 as a result of the Prussian victory over France. The hard core of the new German empire were the Prussians and it was they who provided most of the military leaders. The victories in the 1860's and the knowledge that Germany had the best army in the world meant as the historian I. Geiss described it that the "Prussian military caste was cocksure". It gave them an arrogance and confidence that helped push Germany into war in 1914. Germany had emerged an empire and an increasingly important economic and military power under the helm of the reserved and conservative Bismarck. However he was sacked in 1890 and to quote John R�hl "Imperial Germany under Kaiser Wilhelm II embarked on a long term bid to secure 'world power' status"4. Germany became obsessed with gaining an empire under the sun and the policy of Weltpolitik to achieve this. However by 1909 Germany had been out manoeuvred by Great Britain and isolated and surrounded after the formation of the Triple Entente the members of which were rapidly militarising and matching German power (Russia had implemented the Great Programme in 1912-1914 and France had lengthened military service). ...read more.

However Germany carried on acting in the reckless manner allowing, Austria to issue an ultimatum that Serbia could not accept and therefore they must have known what they were doing and consequently were preparing a European war. 5 Moltke believed that war was Germany's best option. If Germany wanted to achieve its European dominance and an Empire to rival that of Britain it would have to go to war. Men such as Moltke had been preparing for war for years indeed the Schlieffen plan had been formulated in the late 1800's in the event of a war against France and Russia. These Generals placed so much faith in the plan that to quote Rohl they "did not feel impelled to seek a political or diplomatic solution to Germany's grave problems at home and abroad". Moltke himself had been unhappy with the peaceful outcome of the Moroccan Crisis in 1911, such was his desire and drive towards war. 6 In 1911 there was increased tension after the Agadir Crisis when the French had occupied Fez and consequently broken an agreement with Germany. It allowed Germany a pretext to send a gunboat to Agadir. Although the French in effect conceded it persuaded Britain to aid its support behind the French, leaving the Germans isolated other then Austria in Europe. This in turn served to encourage the German Generals that war was the only option. 7 The historian Berghahn put together a thesis blaming German "internal pressures" for pushing Germany into a war. Berghahn blames several factors within Germany. Firstly there was the crisis between the Prusso-German political systems whereby the political system had been based upon the rigid Prussian elite and this was being threatened by increased industrialisation. Secondly there was Tirpitz and his Navy. The cost of creating the large navy was reflected in the taxes and this caused social unrest. Thirdly the paralysis of the Monarchy at home, which involved inflated resentment towards the ruling elite who were ruling increasingly by decree and not through the Reichstag. 03/03/02 ...read more.