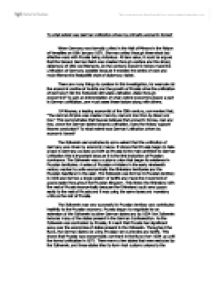 To what extent was German Unification driven by primarily economic forces?

To what extent was German Unification driven by primarily economic forces? When Germany was formally united in the Hall of Mirrors in the Palace of Versailles on 18th January 1871. She was united through three short but effective wars with Prussia being victorious. At face value, it could be argued that the Second German Reich was created through warfare and the strong diplomacy of Otto von Bismarck, on the contrary economic forces made the unification of Germany possible because it enabled the series of wars and made Bismarck's Realpolitik style of diplomacy viable. There are many things to consider in this investigation, for example did the economic decline of Austria and the growth of Prussia drive the unification of Germany? Did the Zollverein stimulate unification vision through economics? To gain an interpretation of what extent economics played a part in German unification, one must asses these factors along with others. J.M Keynes, a leading economist of the 20th century, commented that, "The German Empire was created more by coal and iron than by blood and iron." This demonstrates that Keynes believes that economic forces, coal and iron, drove the German states towards unification. Does the history support Keynes conclusion? To what extent was German Unification driven by economic forces? The Zollverein demonstrates to some extent that the unification of Germany was driven by economic means. It shows that Prussia began to take a lead in Germany as early as 1834 as Prussia is the main architect to German Unification this is important because it is the first indication of Prussian dominance. The Zollverein was a customs union that began its existence in Prussian territories. A series of Prussian ministers in the early nineteenth century wanted to unite economically the Rhineland territories and the Prussian heartland in the east. The Zollverein was formed in Prussian territory in 1818 and formed a single system of tariffs and made the movement of goods easier throughout the Prussian Kingdom. ...read more.

industrialized nation in Europe but Austria on the other hand lacked coal and iron and she fell in stature until eventually her empire dissolved. I am not going to just attribute Prussia's success to coal and iron and I am not going to attribute the fall of the Austro-Hungarian Empire to the lack of natural resources, but the strength of a state depends on economics and economics depends on resources. In particular places in the Kingdom of Prussia there were long seams of coal especially in the Rhineland and the Saar but Austria on the other hand had less coal and therefore generated less wealth. You may ask yourself now, how does the lack of natural resources, a well run economy and a customs union contribute to the unification of a state with more than 40 million people? The answer to this simply is the way an effective economy is applied in statecraft for example military and social reform and application. This is the extent in which Germany is united through economic forces. This economic force was the power of Prussia to purchase a strong army, to have enough money to wage three wars, to have enough knowledge to see the economic and military benefit of railways. Without the Zollverein, natural resources or strong industrialists like Alfred Krupp it is unlikely that Prussia could have afforded a strong army or waged the wars of unification. All of these things contribute to the unification of Germany and as they are all based on the economic strength of Prussia it is logical to assume that to a substantial extent economics drive German Unification. The second half of my investigation is the key link between economics and the actual process of unification. With the increased wealth of the Prussian state, she was able to improve the Railway system throughout Prussia. Railways were important because they made supply quicker but also they were very useful in times of war. ...read more.

It is important not to underestimate nationalism because although it wasn't practically changing things, it was changing the hearts and minds of ordinary Germans up until the eve of unification. Many historians consider Bismarck to be the primary driving force of unification through his diplomatic maneuvering throughout his time in office and how he convinced William I that a war with Austria then France was necessary. He created the diplomatic climate for Prussia to wage three wars and not be outnumbered by a coalition of enemies and so Prussia ultimately wins the wars of unification. Bismarck is a driving force of unification because he creates a diplomatic climate and he engineers wars in order for Prussia to win them and become larger until the Prussian Kingdom is large enough to be called the German Reich like what happens in 1871. So it is not wise to ignore Bismarck's contribution to the unification of Germany. To conclude, to a large extent economics play a part in the unification of Germany, not only does a richer Prussia and a poorer Austria cause Prussia to physically annex the German Bund but economics forms the foundations of everything that works toward German unification, this is why economics is so largely responsible for German unification. Behind Bismarck's poignant speeches was the knowledge that Prussia was economically powerful and could compete with anyone in Europe. Behind the strong army of Prussia was the money gained from coal and iron. Keynes believed that coal and iron were more important than blood and iron. It can be justified because without the coal and iron the wars of unification with Denmark, Austria and France would not have taken place because Prussia would not have the resources to win these wars. The 'blood' of Bismarck's quote is more relevant to the blood spilled by the industrialists, workers and miners throughout the unification process than the blood spilled by soldiers at Sadowa or Sedan because it was the industrialists, workers and miners that united Germany through the extraction and manufacture of raw materials that powered the Prussian economy and financed the Prussian army. ...read more.