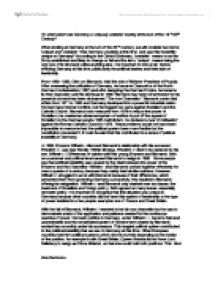 To what extent was Germany a 'uniquely unstable' society at the turn of the 19th/20th Century?

To what extent was Germany a 'uniquely unstable' society at the turn of the 19th/20th Century? When looking at Germany at the turn of the 20th Century, we will consider two terms; 'unique' and 'unstable'. Was Germany unstable at this time and was this instability unique to Germany? According to the Oxford Dictionary, 'unstable' means to not be firmly established and likely to change or fall and the term, 'unique', means being the only one of its kind and unlike anything else. It is important to look at all factors effecting Germany at this time, particularly the political leaders and their style of leadership. From 1862- 1890, Otto von Bismarck, held the role of Minister-President of Prussia. After overseeing the unification of Germany, he became Chancellor of the North German Confederation (1867) and after designing the German Empire, he became its first Chancellor until his dismissal in 1890. Bismarck has been remembered for his powerful rule and has been nicknamed, "The Iron Chancellor." ...read more.

With the fall of Bismarck, Wilhelm II resolved to be his own chancellor but he was to demonstrate a lack of the application and patience needed for the continuous exercise of power. Domestic politics in Germany, under Wilhelm II, became fluid and unpredictable and the complicated system of Government created by Bismarck worked less smoothly under his successors. This tangled political system contributed to the political instability that we see in Germany at this time. Other European countries held firm political systems which did not crumble depending on the holder of the position. An example is with Great Britain; Queen Victoria did not force Lord Salisbury to resign as Prime Minister, so that she could hold both positions. This kind of political instability was unique to Germany in the sense that other countries did not experience this sort of insecurity. This merge of power caused people to be confused about where real authority lay in Germany. ...read more.

This boost in the economy was not unique to Germany and was happening in other countries as well, mainly Great Britain. It is also clear that Germany was in a firm and stable position at this time, despite the occasional recession. It was clear that Germany was politically unstable at the turn of the century, with the constitution perhaps being the biggest flaw in the political system. However, this flaw as not exposed until Emperor Wilhelm II and Chancellor Bismarck had to work together; the constitution was designed on the assumption that both the Emperor and Chancellor work effectively together. This was unique to Germany; no other country had this system, no other country was this politically unstable and no other country had a character similar to Bismarck in Germany. However, Germany economically stable and had overtaken Great Britain in becoming the leading industrial superpower; the population rose, technology advanced and production increased. It is fascinating to see two aspects of Germany at this time; a politically unstable Germany with few people knowing where real authority lay and an economically stable country with a booming economy. ?? ?? ?? ?? Alex Buchanan ...read more.