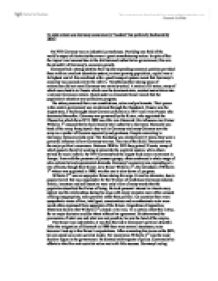 To what extent was Germany economically modern but politically backward by 1914?

To what extent was Germany economically "modern" but politically backward by 1914? By 1914 Germany was an industrial powerhouse. Providing one third of the world's output of electricity they were a great manufacturing nation. In spite of this the impact was lessened due to the disillusioned authoritarian government, this was the downfall of Germany's economic growth. Germany had a strong identity, their rapidly expanding economic position provided them with an excellent education system; an ever growing population; capital was at its highest and all this combined with a good transport system meant that Germany's economy was second only to the USA's. Nonetheless their strong sense of nationalism did not mean Germany was entirely united. A nation of 25 states, many of which were hostile to Prussia which was the dominant state, resisted assimilation into a national Germanic culture. ...read more.

The rise of the Social Democrats was the major political occurrence. Between 1890 to 1912 they gained 70 seats, many of which posed a threat by wanting to demolish the capitalist system, while others strived for social reform. By 1914 Germany had the largest trade union movement in Europe. Even with the presence of pressure groups, others embraced a whole range of ultra-nationalist and expansionist demands. Germany's economy was expanding at a rate of knots, though their Kaiser, now Kaiser Wilhelm 2nd; the Grandson of Wilhelm 1st, whom was appointed in 1888, was the one to slow down all progress. Wilhelm 2nd was an unpopular Kaiser during his reign. It was his character, due to popular belief, that was responsible for the 30 years of misfortune Germany endured. ...read more.

After converting his views on the SPD, he now stood as an anti-socialist leader. For many years Wilhelm 2nd was the most decisive figure in the government. He dictated most aspects of policy. Conversely his efforts to take firm anti-socialist action met with little success. Germany's ruling seemed disorientated with a leader who was more interested in the social scene; whose policies were not driven and who had little public support. Under Kaiser Wilhelm 2nd reign, politically there was no growth. Even with Germany's elite industrial stronghold, it was still seen as an authoritarian monarchy. It seemed that the Kaiser was oblivious to his abhorrence; he made no attempt to allow the country to make progress. It therefore fell behind the forever advancing worldwide political state and it wasn't until 1918 when Germany became a republic that they began to move forward. ?? ?? ?? ?? Hannah Griffiths ...read more.