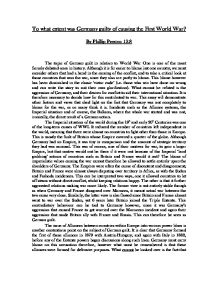 To what extent was Germany guilty of causing the First World War?

To what extent was Germany guilty of causing the First World War? By Phillip Preston 12.8 The topic of German guilt in relation to World War One is one of the most fiercely debated ones in history. Although it is far easier to blame just one country, we must consider others that had a hand in the causing of the conflict, and to take a critical look at those countries that won the war, since they also are partly to blame. This blame however has been diminished in the classic 'victor code' (i.e. those who win have done no wrong and can write the story to suit their own glorification). What cannot be refuted is the aggression of Germany, and their desires for conflict to aid their international situation. It is therefore necessary to decide how far this contributed to war. This essay will demonstrate other factors and views that shed light on the fact that Germany was not completely to blame for the war, as so many think it is. Incidents such as the Alliance systems, the Imperial situation and of course, the Balkans, where the whole war started and was not, ironically, the direct result of a German action. ...read more.

What the alliances did lead to however, was the situation in the Balkans. The situation in the Balkans, with the two crises, was made ever more dangerous thanks to the alliances, as the two largest countries with interests in the region were Russia and Austria-Hungary whom were on opposite sides. This immediate situation can be attributed to Germany, since they started the alliance systems, and so they must take blame for this. Yet the two crises themselves cannot be the fault of Germany since they played no part in them. The Bosnian Crisis especially, since that was entirely owing to dealings between Austria-Hungary and Russia. Germany, and indeed the rest of the world, had no idea that these deals were going on! When the crisis came to fruition, Germany initially took the side of the Turks, leaving their ally in the lurch, and completely avoiding the possibility of conflict with Russia. This absolves Germany of blame entirely. The second crisis as well did not concern Germany. In fact the only hand that Germany had in these two crises was being the 'silent' power behind Austria-Hungary and took no direct action against or for any side, she is almost entirely absolved of any guilt on this charge. ...read more.

This again cleared Germany of any damning guilt associated with the war until the discovery of the 1912 'War Council' controversy in which German military leaders planned a war two years into the future. This again is not proof that they were guilty for the war, as Britain also wanted to wait for war so they could prepare their navy and so on. Indeed the Schlieffen plan was drawn up 20 years earlier and this cannot be taken as war guilt for its sheer ludicrousness. A military tactical plan drawn up by one German general 20 years earlier cannot be classed as proof they started the war since the French were doing exactly the same. As I said earlier, it was the presence of many such documents from all the different countries that led to war rather than the alliances. It is clear to see therefore, that whilst the evident aggressor of the period and driving force towards war was Germany, the many factors that caused the war can only be partially attributed to Germany, or in some cases, not at all. In light of the Treaty of Versailles, it is evident that the 'victor code' has indeed been enforced upon Germany who was made to take the blame for everyone. Surely denying your involvement in such a perpetration of destruction on an unimaginable scale is far worse than admitting your own small part in it. ...read more.