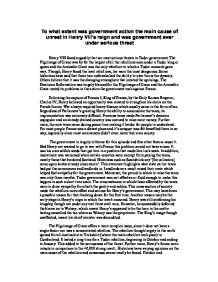 To what extent was government action the main cause of unrest in Henry VIII's reign and was government ever under serious threat Henry VIII faced arguably the two most serious threats in Tudor government. The Pilgrimage of Grace was by far the largest of all the rebellions seen under a Tudor king or queen and the Amicable Grant was the only rebellion to which a Tudor monarch gave way. Though, Henry faced the least rebellions, his were the most dangerous. Some historians have said that these two outbreaks had the ability to over throw the dynasty. Others believe that it was the changing atmosphere that created the uprisings. The Henrician Reformation was largely blamed for the Pilgrimage of Grace and the Amicable Grant rooted its problems in the action the government took against France. Following the capture of Francis I, King of France, by the Holy Roman Emperor, Charles IV; Henry believed an opportunity was created to strengthen his claim on the French throne. War always required heavy finance which usually came in the form of tax. Regardless of Parliament's granting Henry the ability to accumulate the taxes, its implementation was extremely difficult. ...read more.

The Pilgrimage of Grace offers a more complex issue, since it does not have a single factor nor was a concentrated rebellion. The rebellion though largely in the north spread from Lincolnshire to Yorkshire (where the main rebellion took place) to Cumberland. It lasted a long time for a Tudor rebellion, beginning in October and ending in January. This added to the seriousness of the threat. Further more, Henry's forces were minute in comparison to the 40,000 strong revolt. Historians have varying opinions on the main cause of the rebellion and consensus cannot easily be found. Fletcher and MacCullock identify the Henrician Reformation as the main cause and to a greater extent it is true that the religion was an important theme that ran through the Pontefract Articles. However, it was indeed the gentry under the influence of the clergy who wrote the list of demands and hence further evidence is needed. Religion is also crucial in finding and umbrella under which a cross-section of society can come together. The dissolution of the smaller monasteries by Cromwell led to unrest in the north since charity was one of their prominent tasks as Davies hints. ...read more.

It is also important to remember that the Pilgrimage of Grace was not a single rebellion but a watershed term for several rebellions. Key nobles such as the Duke of Norfolk were against it, weakening the revolt's effectiveness. Nevertheless, it did catch the government unaware and did make Henry cringe at the thought of its possible success. In conclusion, Henry's government did face a relatively stable and long period of rule. This does mean that the threat may have over-thrown the comparatively short periods of reign of Edward VI and Mary I but for Henry and Elizabeth it was an unlikely situation. However, it is not to say that the threat is only a footnote, as in the end the two rebellions did achieve either all or most of their aims in the future. Hence, they were a point of influence upon him. In terms of government action being the main cause, it can be said with confidence that this was the case. The actions of Henry's chief ministers did lead to much of the unrest throughout the country, and though there were bad harvests and poor trade, the government was largely to blame when it came to change. The problem faced was the modernising of a conservative nation at such as rapid pace especially during Cromwell's period of influence. ...read more.