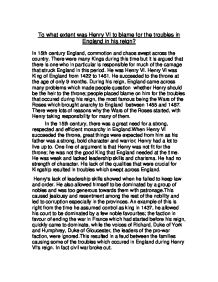 To what extent was Henry VI to blame for the troubles in England in his reign?

To what extent was Henry VI to blame for the troubles in England in his reign? In 15th century England, commotion and chaos swept across the country. There were many Kings during this time but it is argued that there is one who in particular is responsible for much of the carnage that struck England in this period. He was Henry VI. Henry VI was King of England from 1422 to 1461. He succeeded to the throne at the age of only 9 months. During his reign, England came across many problems which made people question whether Henry should be the heir to the throne; people placed blame on him for the troubles that occured during his reign, the most famous being the Wars of the Roses which brought anarchy to England between 1455 and 1487. There were lots of reasons why the Wars of the Roses started, with Henry taking responsibility for many of them. In the 15th century, there was a great need for a strong, respected and efficient monarchy in England.When Henry VI succeeded the throne, great things were expected from him as his father was a strong, bold character and warrior; Henry had a lot to live up to. ...read more.

Rivalries also broke out because of the distribution of royal land to the King's court favourites. An example of this rivalry is between Richard, Duke of York and the Duke of Somerset. Henry favoured Somerset over York which made York rebel and try and claim the throne himself. Henry also played another role in this rivalry as he never paid his debts to the Duke of York, whereas he did pay off the Duke of Somerset. These rebellions and rivalries caused havoc across England. To some extent, many people blamed Henry for this as it was his actions that led to arguments between nobles. If Henry had acted differently and treated all nobles equally, many people believe that the conflict between nobles would have never existed and there would not have been the Wars of the Roses. To this extent, Henry VI was to blame for these troubles. By the late 1440's, it was clear that Henry was not right for the throne. He already had so much pressure on him as a King. He was in large amounts of debt and was still in constant need of taxest loans. ...read more.

From day one on the throne, Henry VI was already at war with France, but it is still argued that he could have dealt with his troubles in a better way. Another factor which shook the country was the Black Death. It changed the whole structure of society as so many people died. It is safe to say that Henry was not to blame for this ordeal. There is no doubt that to some extent, Henry VI was to blame for the troubles that came across England during his reign. I believe that it was all due to Henry being a poor King. If he had been more decisive and a better leader for his country, then it is argued that many of the troubles would not have ocurred, particulary the Wars of the Roses which is believed to be the most serious. Henry seems to have been a decent man, but completely unsuited to kingship. He allowed himself to be totally dominated by the power-hungry factions which surrounded him at court and was later powerless to stop the outbreak of bloody civil war. I believe that he played a huge role in the troubles that swept across England during his reign. ...read more.