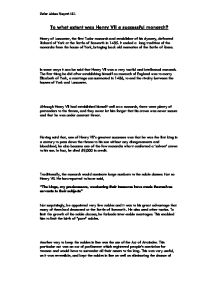 To what extent was Henry VII a successful monarch? Henry of Lancaster, the first Tudor monarch and establisher of his dynasty, defeated Richard of York at the Battle of Bosworth in 1485. It ended a long tradition of the monarchs from the house of York, bringing back old memories of the Battle of Roses. In some ways it can be said that Henry VII was a very tactful and intellectual monarch. The first thing he did after establishing himself as monarch of England was to marry Elizabeth of York, a marriage consummated in 1486, to end the rivalry between the houses of York and Lancaster. Although Henry VII had established himself well as a monarch, there were plenty of pretenders to the throne, and they never let him forget that his crown was never secure and that he was under constant threat. Having said that, one of Henry VII's greatest successes was that he was the first king in a century to pass down the throne to his son without any disagreements and bloodshed, he also became one of the few monarchs who transferred a 'solvent' crown to his son. ...read more.

Henry VII found it easier to maintain the same system instead of changing it completely. He did, however, reform the system. This resulted in a better financial status for the monarchy overall, and he passed down a solvent crown to Henry VIII. Although he did decrease the amount of overall payment he gave up to the nobility compared with he predecessors, which did not increase his popularity with the nobles. He was largely successful, however, in improving the overall financial condition of Tudor England. He passed 140 acts of attainder which gave him more ready cash that he was able to spend easily. He evolved the way he gave out money to people. Unlike his predecessors who gave money and gifts to ensure loyalty, Henry VII would give money and gifts to those already loyal to him. This was, in part, because of the large amount of threats he had for the crown. Significantly, dissimilar to previous monarchs, Henry VII had a more personal grip on the royal finances; he did not leave it all to his officials, but liked to know what was going on with his money. ...read more.

He adopted the Yorkist system of government with slight reforms. The Kings Council, which exists to the present day, was slightly different back then. It consisted of high profiling barristers as well as clerics. However, the role of the parliament was very limited. It is interesting to see that Henry had 29 Yorkists on the council, which shows that he was willing to work with them. It could also show his wisdom, that because the Yorkists were aware as to how the government was run, Henry retained them in his council. The Parliament met very infrequently and this implies that the state run by Henry was not fully democratic. Inevitably, the inadequacies of the local government had much bearing and impact on the central government. In conclusion, it can be said that Henry was generally a successful monarch as far as establishing his dynasty, finance and foreign policy are concerned; it could be argued that his success was limited in reforming the government systems, both local and central, and also his behaviour towards the nobility was frowned upon. He was successful in limiting the powers of the nobility, but was unable to become popular with them. Overall, his successes most definitely outweigh his failures and shortcomings. Zafar Abbas Naquvi 12L ...read more.